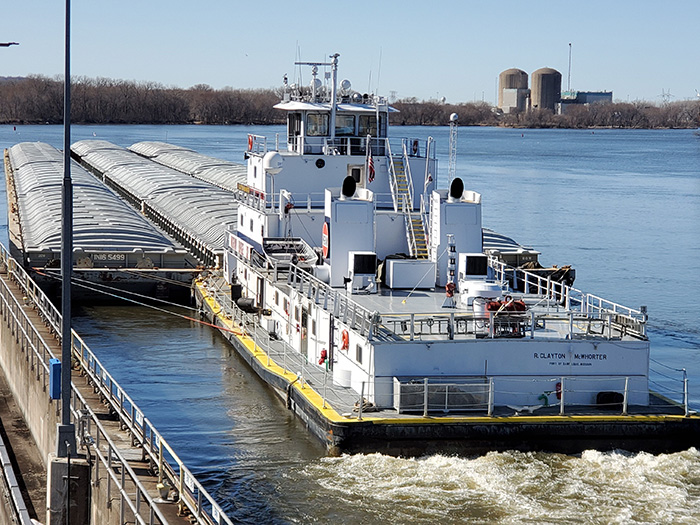 Marking the unofficial start of the 2021 Mississippi River navigation system, the Ingram Barge Company’s M/V R. Clayton McWhorter, originating from the Quad Cities in Iowa and Illinois and pushing 12 barges en route to St. Paul, Minn., was locked through Lock and Dam 3, near Welch, Minn., around 1:45 p.m on March 19.

The tow is the first of the 2021 navigation season to pass through Lake Pepin. Located between the Minnesota cities of Red Wing and Wabasha, Lake Pepin is the last major barrier for vessels reaching the head of the navigation channel in St. Paul.

The lake is the last part of the river for ice to break up, because the river is wider and subsequently the current is slower there than it is at other reaches of the river. If a tow can make it through Lake Pepin, it can make it all the way to St. Paul.

While the start of navigation is an exciting time for the region and a welcomed sign of spring, ongoing construction south at Lock and Dam 25 near Winfield, Mo., will limit navigation on the entire Upper Mississippi River until the end of the month.

The St. Paul Engineer District maintains a 9-foot navigation channel and operates 12 locks and dams to support navigation from Minneapolis to Guttenberg, Iowa. On average, agricultural producers save around $1 per bushel on corn and soybeans by using the river to ship their commodities rather than other transportation methods.

The commercial navigation industry estimates an annual average savings of nearly $400 million by using the inland waterways instead of overland shipping methods. In addition to the economic savings, navigation reduces the stress on roads and bridges. A 15-barge tow can move as much bulk commodities as 1,050 semis or more than 200 rail cars.