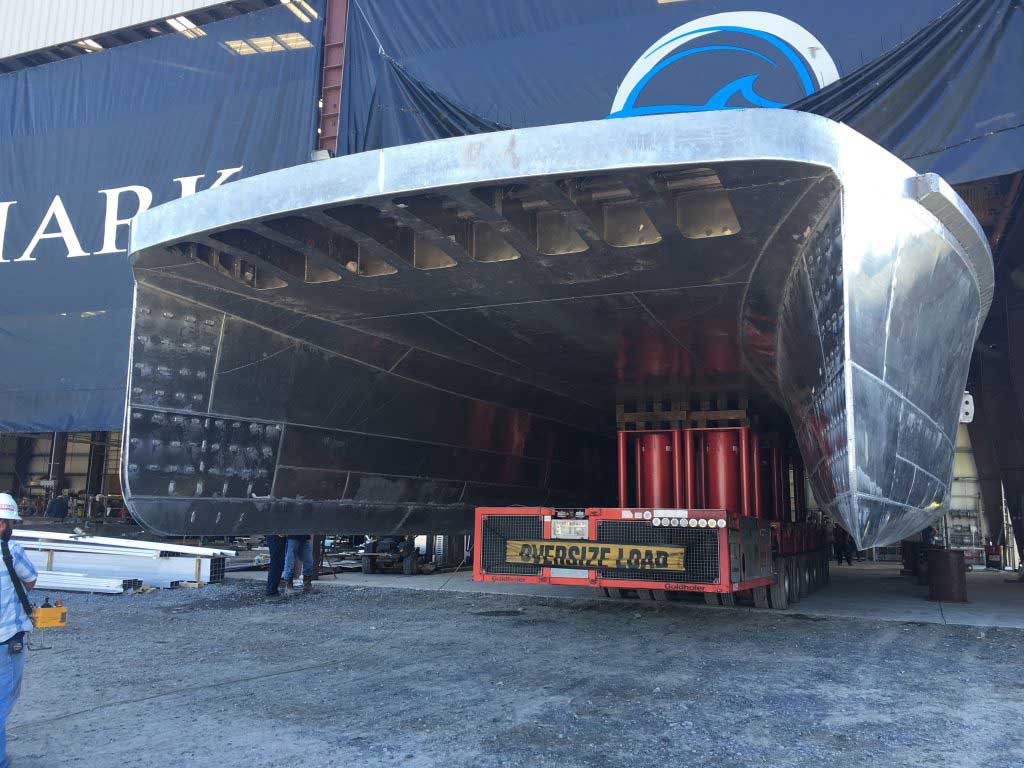 About 200 full-time shipbuilders are working on the project at the two shipyards.

Both shipyards are currently receiving vessel components and building the frame for each boat, before systematically assembling the rest of the hull and superstructure. This construction process reduces manufacturing time, allows for minor modifications throughout the build process and furthers on-time project delivery, with the first set of vessels expected to arrive in New York City in early 2017.

“Metal Shark and Horizon bring to the table over 50 years of experience in producing large quantities of safe, reliable and environmentally efficient vessels under very tight timelines,” says Cameron Clark, Hornblower’s Senior Vice President for Development and Project Manager for Citywide Ferry. “Come summer 2017, millions of New Yorkers will have a new way to ‘Work, Live, Play’ on our growing and thriving waterfronts, and we are confident in both shipyards’ ability to deliver the next big critical piece of New York City’s transportation network on schedule.”

“We are moving full steam ahead and bringing modern ferry boats, outfitted with the latest technology and safety features, to our waterways. This new fleet will help us connect commuters and visitors alike to neighborhoods throughout the city,” says Mayor Bill de Blasio.

“With vessel construction now fully underway, we’re one step closer to bringing fast, affordable ferry service to neighborhoods across the city,” says NYCEDC President Maria Torres-Springer. “We can’t wait for New Yorkers to see these modern and efficient boats, which will arrive in New York Harbor starting early next year.”

The 85 ft vessels will each have capacity for 150 passengers along with space for bikes, strollers and wheelchairs. They will use ultra-efficient engines to reduce emissions and use an innovative hull design to limit wake and maximize fuel efficiency.

Citywide Ferry Service will carry an estimated 4.6 million passenger trips per year across six routes, providing new transportation to communities where housing and jobs are growing rapidly. The East River Ferry will also be fully integrated into Citywide Ferry, which will reduce the cost of that service from $4 to the same cost as a subway ride.

The 19 vessels will be operating at 21 landings throughout New York City, providing an affordable transit option for people in underserved communities and connecting New Yorkers with the city’s hundreds of miles of waterfront.

Phase one of Citywide Ferry Service, which includes the use of 12 vessels, is scheduled to launch in summer 2017.