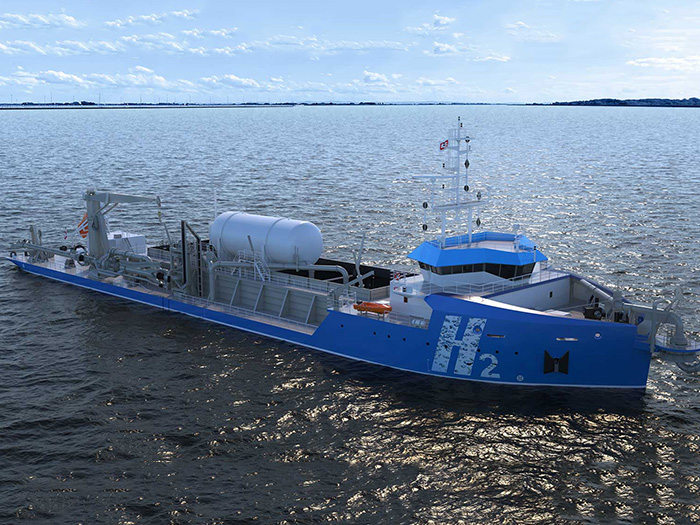 Bureau Veitas has granted Royal IHC an Approval in Principle (AiP) for the design of a hydrogen-fueled trailing suction hopper dredge (TSHD).

Royal IHC is exploring a new type of vessel referred to as the “LEAF” (low energy adaptive fuel) hopper in an innovation partnership with the Rijkswaterstaat, the part of the Dutch Ministry of Infrastructure and Water Management and responsible for the design, construction, management and maintenance of the main infrastructure facilities in the Netherlands.

The AiP from Bureau Veritas means that the proposed design of the vessel, encompassing its features and specifications, has been deemed acceptable at this early stage and that the hydrogen system has been safely integrated. The exploration phase began at the beginning of 2019 with the aim of developing a vessel that can be operational in 2024.

Rijkswaterstaat has the ambition to become CO2 neutral by 2030, and needed to come up with cost-effective solutions for its coastal protection projects that could significantly reduce CO2 from 2024.

With this in mind, Royal IHC has been developing a hydrogen-powered TSHD to be used to maintain the Dutch coastline. The LEAF hopper will contribute to the reduction of greenhouse gas emissions as well as harmful exhaust gas emissions in close proximity to the coast and coastal cities. When operating on hydrogen the vessel emits only water vapor.

A minimal amount of CO2, SOx, NOx and particulate matter is released only during the construction of the vessel and in producing the green hydrogen that will fuel the dredge. In addition, many design features on the LEAF hopper contribute to low energy consumption, including an electric drive train and energy recovery systems.

The receipt of the AiP has given Royal IHC and Rijkswaterstaat the confidence to further develop the LEAF hopper as a solution for CO2 neutral coastal protection works.