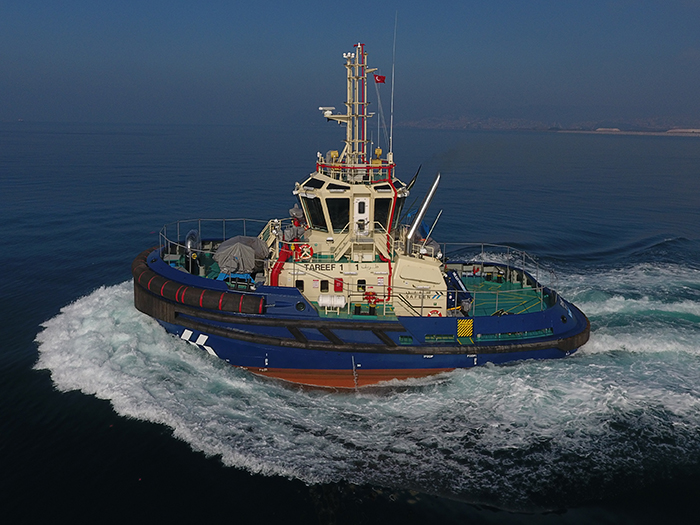 With eight MED-A2360s built to date, Med Marine is set to produce three more of this increasingly popular tug.

R. Hakan Sen, CEO, Med Marine, said: “We are proud to announce the successful delivery of Tareef 1 to Abu Dhabi Ports. Like our other MED-A2360s currently in service, Tareef 1 is a powerful and agile vessel that possesses the maneuverability to operate within challenging port environments.”

Compared to other 60 tonne BP designs, MED-A2360 series tugs are shorter and more compact, but boast improved power and maneuverability, which allows them to counter challenges that may occur in narrow and shallow ports.

With an overall length of 23 meters and beam of 10.9 meters, they deliver a bollard pull of 60 tons.

Main propulsion power is delivered by twin CAT 3512 diesels, each developing 1,765 kW @ 1,800 rpm and giving the vessels a speed of 12 knots — which is somewhat slower than the Tareef 1’s apparent speed in the time lapse video of its delivery voyage.