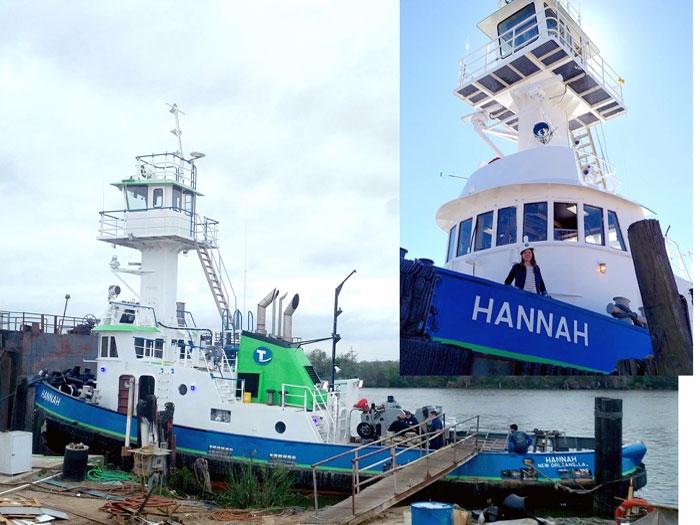 The engines were supplied by Laborde Products, the largest distributor of Mitsubishi Marine engines in North America. They offer a complete line of heavy duty, fully mechanical Tier 3 engines from 400 to 1,675 hp. The engines are being fitted along with Reintjes WAF 562 transmissions (with a reduction ratio of 6:1) supplied by Karl Senner, LLC, Kenner, LA. The engines will drive 76 in by 76 in propellers in Kort nozzles.

Towing equipment will include an Intercon SD-150 winch with 2,200 feet of 1.5 in wire, towing shackles, wire bridles, portable running lights, pneumatic Norman pins, a stern roller, and a bow winch for barge handling.

The tugs will be equipped with modern electronics and alarm system with remote annunciator panel in the wheelhouse, Rosepoint electronic charting, and Iridium satellite phone and email.

The repower is being carried out at A&B Industries and overseen by Tradewinds Towing’s President Dominique Smith and Marine Superintendent Wayne Martin. Tradewinds Towing was formed by Mr. Smith and his sister, Rachel Smith, in 2005. Rachel serves as the company’s Managing Director.

The first tug is expected to be completed in April, followed by the second tug a few months later. Once the work is completed, the repowered tugs will operate under a long-term charter on a dedicated route from Pensacola, FL to Port Arthur, TX pulling oceangoing chemical barges.

Back 10 years ago in September 2006, Dominique Smith approached Laborde Products about repowering the low-profile tug Miss Lis with a Mitsubishi S12R engine. Later that same month, the deal was made, and shortly thereafter, the Miss Lis set sail with new Mitsubishi engines and Reintjes transmissions. Since then, the engines have logged over 30,000 hours travelling throughout North, Central and South America.

Over that time, Tradewinds Towing, LLC, has grown from one tug to now operating a fleet of seven vessels. It operates tugs in coastwise and ocean towing.