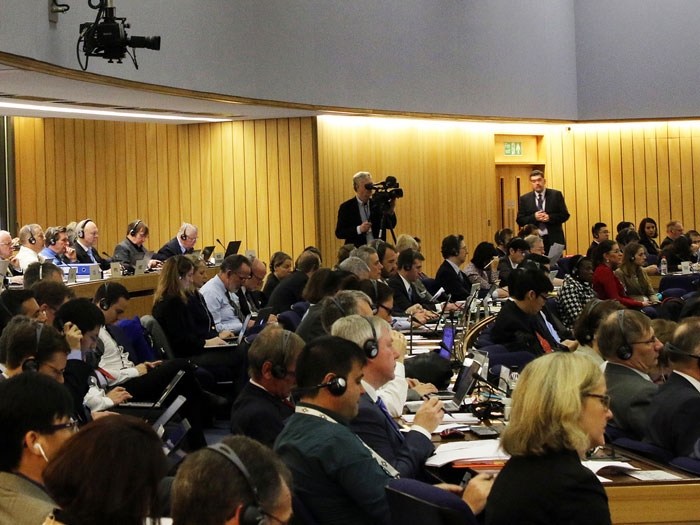 Shipowners are urging that next session of IMO's Marine Environmental Protection Committee take account of availability of U.S. approved BWMS

According to the  Round Table of International Shipping Organizations (BIMCO, the International Chamber of Shipping, Intercargo and INTERTANKO) this “would force the international shipping industry to spend millions of dollars on BWMS that may not achieve U.S. type-approval and therefore will need to be replaced in a short period of time.”

The Round Table thinks the IMO Convention could soon be ratified and could enter into force as early as 2016.

Shipowners that have not already done so, will be required to spend between $1 million and $5 million to install a BWMS on each of their ships in accordance with the schedule established in IMO Assembly Resolution A.1088(28), says the Round Table. It estimates there are 50,000 ships that require to be fitted with BWMS over a five year period.

The Round Table says this could “create an impossible situation for ships that trade to the United States, where unilateral national regulation is already in force. The U.S. regulations ultimately require all ships that discharge ballast into U.S. waters (12 miles) to treat this through a U.S. Coast Guard (USCG) approved BWMS. Currently there are a number of BWMS in the USCG testing and approval process, but none that have as yet received type approval.”

The Round Table says it has urged the U.S Coast Guard to approve as many ballast water management systems as possible, as soon as possible and provide a pragmatic schedule for the installation of such equipment. Further meetings between the Round Table and senior leaders of the US Environmental Protection Agency (EPA) re-emphasized these points.

“There are 54 BWMS approved under the IMO regime, but worryingly only 17 manufacturers have indicated an intent to submit their system for USCG approval testing,” says the Round Table. “There is no guarantee that systems submitted will gain approval under the stringent U.S, testing regime; consequentially, when the IMO convention enters into force, ship operators trading to the U.S. will be forced to fit a BWMS that may never achieve USCG type approval. If the chosen system does not obtain USCG approval, it will have to be replaced within five years in order to continue to trade to the US. A shipowner, who in good faith wants to comply with international and national ballast water management requirements, therefore faces an unacceptable position of having to possibly invest twice in a BWMS through no fault of his or her own.”

“Similarly,” says the Round Table, “IMO Member States are strongly urged to take this potentially very costly issue into account when deliberating ballast water management issues at the upcoming 68th session of the IMO Marine Environment Protection Committee. The safest way to avoid it is to ensure that there are sufficient USCG approved BWMS available on the market before the IMO Convention enters into force. This also implies that national BWMS manufacturers should be encouraged to apply for U.S. approval; the low rate of application raises serious concerns over confidence in the operational capability of equipment that is already being sold.”