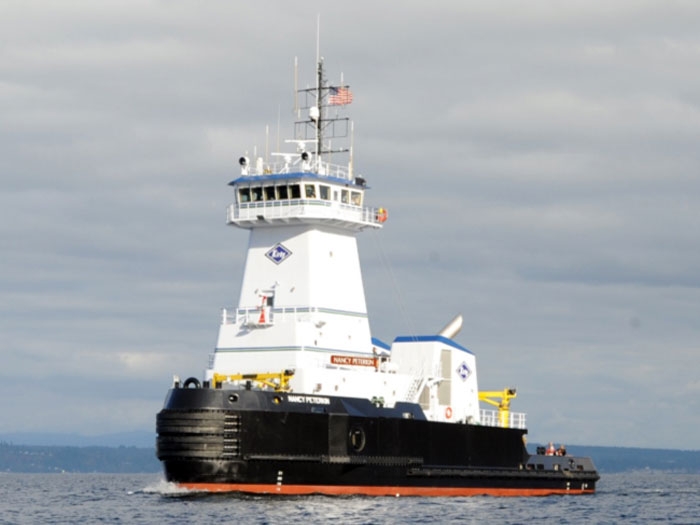 The Nancy Peterkin ATB tug is fully ABS classed, SOLAS compliant with UWild, ACCU and CPS notation. It has a fully automated engine room with a clean layout and LED lighting throughout and is fully setup for zero discharge. The specific attention to detail in the layout, eliminating unnecessary steps and other hazards, has resulted in a better crew experience. The vessel also has Tier 3 engines and generators satisfying EPA regulations for this class of vessel.

According to Pete Sinclair, Chief Naval Architect at Nichols Brothers Boat Builders, “The Nancy Peterkin is a modern, complex and technologically dense ATB tug designed and built to meet ABS class and SOLAS regulations.  Beyond the basic class notations she is also approved as ACCU and CPS (unmanned automated machinery space and ballast tanks coating systems respectively).  Meeting these demanding regulations, and the high construction standard expected by the customer, have produced a vessel that is going to serve Kirby well for many years.”

Sinclair continues, “The project was a true team effort with Kirby providing great support throughout.  Nichols Brothers Boat Builders extends thanks to everyone involved, including Guarino & Cox, BMT Nigel Gee, Nautican, Fusion Marine, Marine Interior Systems and all the other suppliers as well as ABS for their diligence and support”.

This vessel was launched using Nichols new launch system, allowing for the successful launch of vessels up to 3000 tons. Gavin Higgins, CEO at Nichols Boats, says, “The new launching system has greatly increased the size and type of vessels Nichols Boats can now build and launch. In addition to the previous comments, we greatly appreciate the team effort that was made by all the vendors on this project, the Nichols personnel and the Kirby Team. The net result is the successful launch and delivery of the M/V Nancy Peterkin, an outstanding vessel”.

During acceptance trials, the M/V Nancy Peterkin far exceeded the minimum level of pulling power, logging over 165 tons in the Bollard Pull test, as noted on its Bollard Pull certificate. Additionally, she also had a free running speed in excess of 16 knots.

Nichols Brothers Boat Builders provides new construction services for various types of vessels.   Nichols Boats has built over 20 tugs, ranging in size from 100 to 136 feet in length. The Kirby sistership, the M/V Tina Pyne, also a 10,000 HP ATB tug, is currently under construction at Nichols Brothers and is scheduled to launch in the spring of 2016. Additional new construction projects currently underway at the shipyard include a third superstructure for the WSF 144 ft car ferry being built at Vigor, a 150 ft RO/PAX ferry for American Samoa, two 139 ft x 44 ft ATB Tugs, two Catamaran Superstructures for WETA, and two 5,000 HP, 120 ft Line Tow Tug Boats for Kirby Offshore Marine.