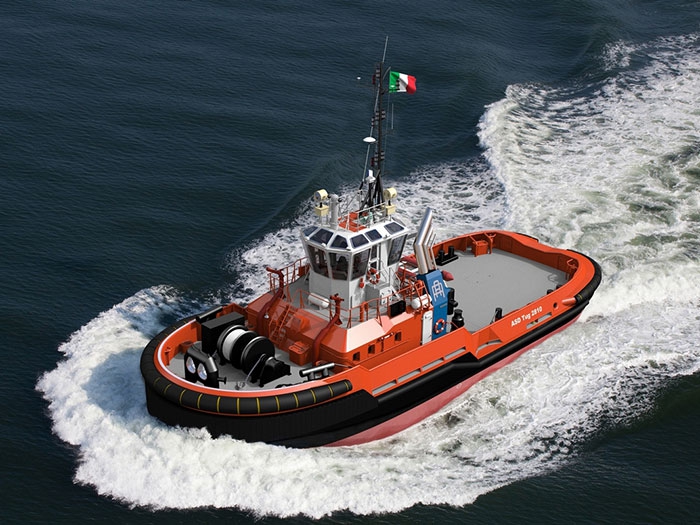 JULY 5, 2016 — Italy’s Rimorchiatori Augusta and Damen Shipyards Group have signed a contract for an ASD 2810 tug.

The ASD Tug 2810 is its first vessel to be purchased since the deal was announced.

The company provides towage services in the Sicilian ports ofAugusta (where  the new ASD Tug 2810 will operate), Siracusa Santa Panagia, Catania and Pozzallo.

As well as handling regular cargo and passenger traffic, Augusta is one of the Mediterranean’s main oil hubs, serving a number of refineries.

With 60 tonnes of bollard pull the ASD 2810 will bring a new level of capability. It will also be fitted with FiFi 1 firefighting equipment, upgraded towing hooks and have the necessary modifications required to meet Italian flag standards.

A factor in winning the contract was Damen’s ability to guarantee a quick delivery. The vessel is already in build at Damen Song Cam Shipyard in Vietnam and will be handed over to Rimorchiatori Augusta in Italy at the end of this year.

Damen has a long relationshlp with Rimorchiatori Riuniti whose recent orders include a pair of ASD Tugs 2913 and before that an ASD Tug 2411.

This latest acquisition will be the sixth Damen vessel to join the Rimorchiatori Riuniti fleet.

The ASD 2810 is one of the most popular tugs in operation today, with over 200 active around the world. The design is continually updated to take in account customer feedback and improvements in components and technology. Each new vessel is modified to meet the exact needs of the customer.

Dott. Alberto Dellepiane, Director of Rimorchiatori Riuniti S.p.A. commented: “We selected a Damen tug once again based on the quality of its vessels and its ability to deliver the right product at the right time.”Andrea Trevisan, Damen Sales Manager, said, “We are very honored by this order and that a Damen tug will be the first vessel in the fleet of Rimorchiatori Augusta.”