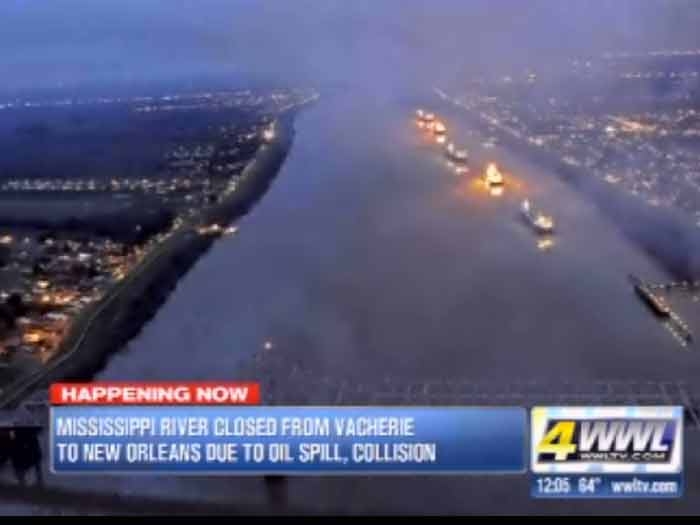 FEBRUARY 24, 2014 — The Mississippi River has reopened with restrictions as of approximately 1:30 p.m..

Mariners must comply with a broadcast notice to mariners being issued for river transits by the Coast Guard.

A 65-mile stretch of the Mississippi River, including the Port of New Orleans, was initially closed to all water traffic after an estimated 31,500 gallons of light crude oil were spilled in collision that took place Saturday near Vacherie, LA.

The lower Mississippi River was later reopened, with conditions, from mile marker 90 to mile marker 130.

The collision involved the Settoon Towing tank barge E2MS 303 and the motor vessel Lindsay Ann Erickson, a towing vessel, into the waterway Saturday.

An AP report quotes Coast Guard Petty Officer Bill Colclough as saying that the barge, one of two loaded with light crude and being pushed by the Hannah C. Settoon, hit the Lindsay Ann Erickson, which was pushing grain barges.

Response crews with Environmental Safety & Health, an oil spill response organization, have strategically deployed containment boom to protect the water intakes for three parishes in the affected area. All impacted water intake facilities in the affected area are taking precautionary measures to prevent contamination. As of today, says the Coast Guard, there were no reports of contamination to drinking water.

The Center for Toxicology and Environmental Health is conducting air monitoring for air pollution threats. No exposure concerns to the public have been detected through this monitoring.

The unified command consists of the Coast Guard, Louisiana Oil Spill Coordinator’s Office, Environmental Safety & Health and Forefront Emergency Management. Also responding are representatives from Louisiana Department of Environmental Quality, Louisiana Department of Wildlife and Fisheries, and with participation from the Governor’s Office of Homeland Security and Emergency Preparedness along with St James and St John the Baptist parishes.

There are currently no reports of oiled wildlife.

“Our highest priorities in this response are the safety of the public and responders, and protection of the environment, said Coast Guard Cmdr. Rebecca Ore, E2MS 303 Incident Commander.