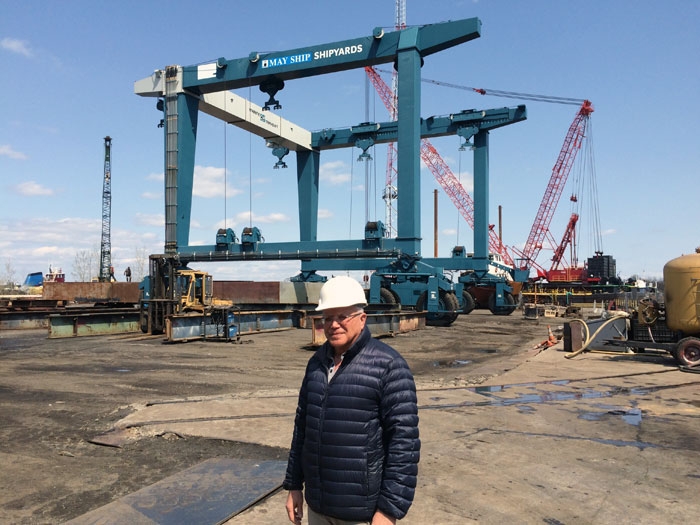 Mohamed Adam, President of May Ship Repair, stands in front of the firm's new 600-ton lifting capacity Marine Travelift, one of the largest in the U.S.

Designed by naval architects DeJong & Lebet, Inc., Jacksonville, FL, the self-propelled tanker will have a carrying capacity of 50,000 gallons and comply with USCG Subchapter D for tank vessels carrying flammable and combustible cargoes.

Specifications for the vessel include two EPA Tier 3-compliant Cummins QSL9 diesel engines, each rated at 335 hp at 1,800 rev/min, with ZF marine gears, 3 in. stainless steel Aquamet shafting and two 42 in. diameter, four-blade bronze propellers. The vessel will have a two-level pilothouse with head, AIS, GPS, compass, depth sounder and display, radar, alarms, and fire station.

Adam expects to finish the hull soon and begin outfitting.

Adam, a naval architect, has more than 40 years experience in shipbuilding, including working at Alexandria Shipyard in Alexandria, Egypt, before joining Caddell Dry Dock & Repair Co., Staten Island in 1973.

Over the years, May Ship serviced cutters, ferries, dredges, and vessels operated by U.S. Coast Guard, and U.S. Army Corps of Engineers, and has built ferry landings, deck, construction and tank barges for commercial and government customers.

In 2012, the shipyard was hit hard by Super Storm Sandy, suffering damage to its equipment and facilities estimated at $2.5 million by the Federal Emergency Management Administration, according to Adam. Three years later, the shipyard still feels the effects of the storm surge, which reached levels of more than 14 feet high in some parts of New York Harbor. Adam says there was about 8 feet of water in the shipyard.

Three years later, a sunken dry dock in front of May Ship Repair’s bulkhead stands testament to the storm’s fury.

Undeterred, Adam has continued to invest in the shipyard, purchasing at auction a massive 600-ton Marine Travelift that was formerly at the now shuttered Derecktor Bridgeport shipyard and has plans to add a 150-foot finger pier. May Ship also built a 2,000-ton lifting capacity dry dock for its facility to replace the one it lost in Superstorm Sandy.