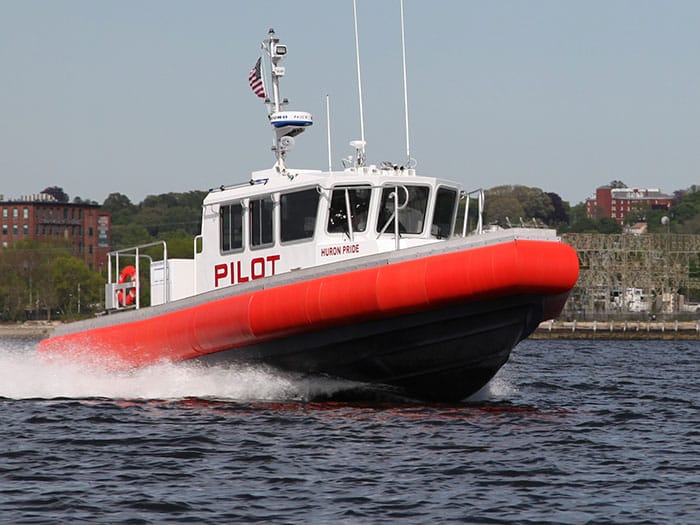 The Lake Pilots’ new launch has a top speed of over 37 knots.

Gladding-Hearn Shipbuilding, Duclos Corporation, has delivered a new pilot boat to the Lake Pilots in Port Huron, Mich., by road transport. The Resilient Class high-speed launch is the pilots’ third boat built by the Somerset, Mass., shipyard since 1979.

Designed by Ray Hunt Design, the waterjet-driven, all-aluminum launch measures 42.5 feet long overall. It has a 14-foot beam and a 2.5-foot shoal draft. The deep-V hull features a steep 24-degree dead-rise at the transom that increases to a very fine entry forward. The perimeter of the launch is fitted with a large foam-collar fendering system. A flat chine and multiple spray-rails provide an efficient running surface and deflect spray away from the collar to produce a dryer ride and reduce collar maintenance. A heavy-duty pipe guard is installed across the transom, along with a platform above the launch’s waterjets.

The boat is powered by twin Cummins QSL-9 diesel engines, which are fully accessible through large lift-assisted deck hatches. The engines, each rated at 450 bhp, at 2100 rpm, turn a pair of HamiltonJet HJ-322 waterjets through Twin Disc gearboxes. Fuel capacity is 300 gallons. A Zipwake interceptor auto trim-control system will be installed on the transom. Top speed is over 37 knots.

“The vessel is an excellent summer complement to the Lake Pilots’ 53- foot Chesapeake Class, burning half the fuel at higher speeds,” said Gladding-Hearn co-president Peter Duclos.

An aluminum pilothouse on a flush deck, with forward-leaning front windows, is set aft of amidships with 18-inch walk-around side decks. Access to the pilothouse is through the aft hinged door. The pilothouse has five Llebroc Stalker XT seats – four pilot seats and one helm seat – and a control console with instruments and controls. A Porta Potty is installed in the forecastle. The launch is outfitted entirely with LED lighting.

The Lake Pilots’ pilot boat is the fourth of the Resilient Class built since its introduction in 2005. The three previous vessels, operating in Texas, Virginia and South Carolina, combined have more than 45,000 operating hours of continuous service, according to Gladding-Hearn officials.