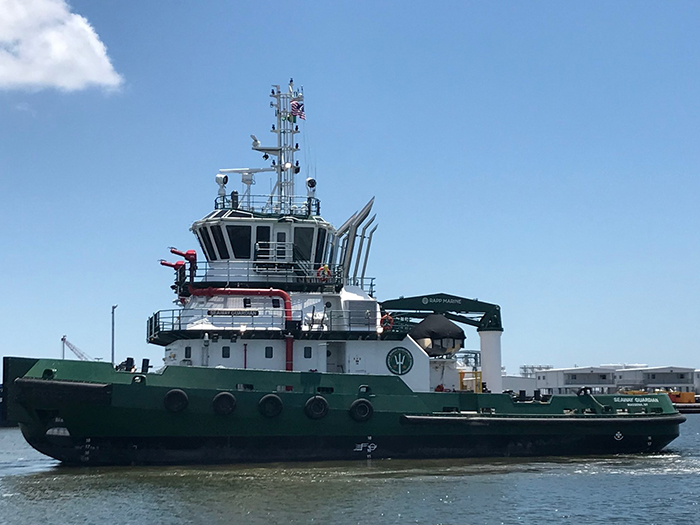 The vessel has been on a three-week journey through the Gulf of Mexico, around Florida, and up the Atlantic seaboard from Gulf Island Shipyards in Houma, La., where it was constructed. The Seaway Guardian will be the first new American-built tugboat to join SLSDC since the Seaway opened 61 years ago.

“The St. Lawrence Seaway is important because it provides access for American raw materials, manufactured goods and agricultural products to be exported all over the world. Many thanks to the Wisconsin-based crew that sailed the new tug on its long journey from the shipyard to the Seaway. The Seaway Guardian, the first new American-built, American-crewed tugboat to join the Saint Lawrence Seaway Corporation in 61 years, will be a great addition to the Seaway’s fleet,” said U.S. Secretary of Transportation Elaine L. Chao.

Construction of the Seaway Guardian, which is a Robert Allan Ltd TundRA 3600 tug capable of operating in difficult ice conditions, began in 2018. The keel was laid on June 26, 2018 and the vessel launched on September 12, 2019. Sea trials in the Gulf of Mexico were completed in June of this year and the tug began its delivery voyage to SLSDC’s marine base in Massena on July 2.

The Seaway Guardian’s primary missions will be buoy maintenance and ice management. It will also assist in firefighting and emergency operational response on the St. Lawrence Seaway. The new tug cost $24 million to construct as part of the SLSDC’s Asset Renewal Program. The tug will replace the 62-year-old vessel, Robinson Bay, which the SLSDC will maintain as back-up for the foreseeable future.