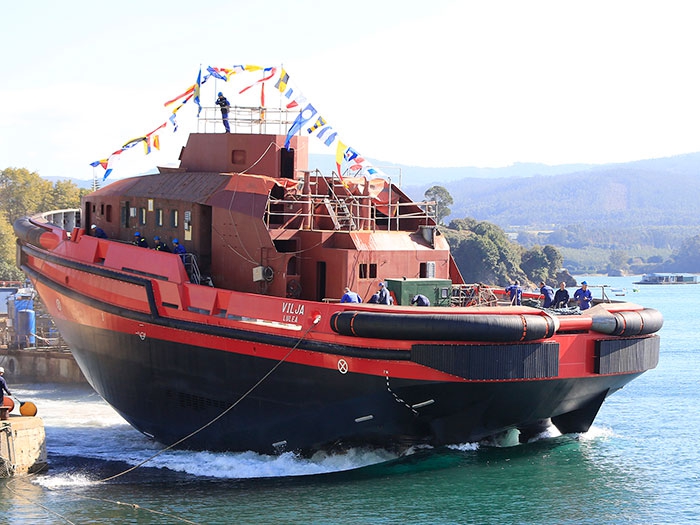 The 36 m vessel has a hull structure that exceeds Finnish-Swedish ice class rules and is capable of breaking 1 meter of ice at a speed of up to 3 knots. In addition icebreaking it is designed to carry ouy ice management, escort, ship-assist, coastal towing, fire-fighting and navigation aids service duties.

Spain’s Gondan Shipbuilding will be the first vessel in operation with a Wärtsilä HY hybrid power solution. It will incorporate two Wärtsilä HY 2 hybrid power modules that will deliver both environmental benefits and operational and flexibility advantages.

The Wärtsilä HY scope includes an energy management system that optimizes the combined use of the engines, the energy storage systems, and the power distribution train. The mechanical machinery part is based on two Wärtsilä 26 engines. The Wärtsilä scope also includes the tug’s integrated automation and alarm system.

The tug will be capable of operating on electrical battery power when in transit. Although it is configured as a mechanical set-up, the “hybrid diesel-electric” mode will allow the number of prime movers utilized to be reduced to just one for various operational tasks. These include ship assist with a bollard pull of up to 55 tons, or 90 tons on two main engines in diesel-mechanical mode. A bollard pull of 100 tons will be available when in battery boost mode.

The vessel will be capable of being completely independent from additional charging facilities, as re-charging of the energy storage system will be automatically managed by the Energy Management System, the “brain” of the Wärtsilä HY. In addition, the installed onshore electrical connection will give the tug the flexibility to recharge the energy storage system, even when the tug is berthed at the quay.