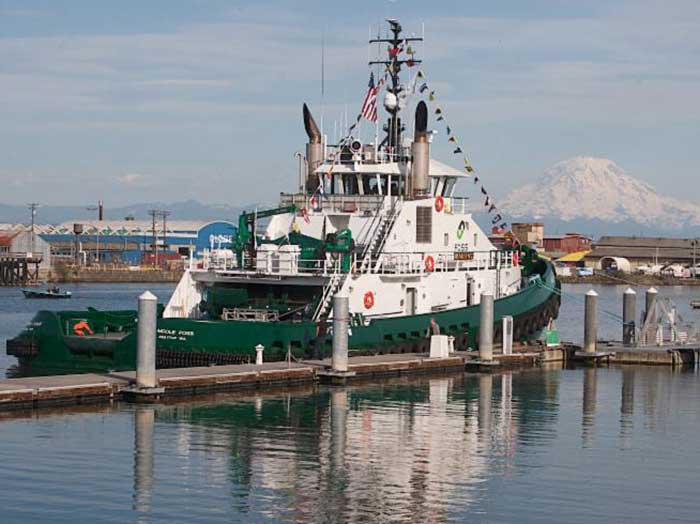 Nicole Foss with Mount Rainier in the background

Built at the Foss Rainier, OR. Shipyard, the Nicole is designed to operate in the extreme conditions of the far north, and will enter service this summer.

In remarks at the christening, Foss President and CEO John Parrott, praised the hard work and dedication of the people, designers, and customers that made Arctic tug project possible, while Scott Merritt, Chief Operating Officer of Foss, praised the team at the Rainier Shipyard.

“As I looked back,” said Mr. Merritt, “I realized that this was hull number 22. It made me think of what has been accomplished at the Rainier Shipyard and the care that goes into each and every vessel. The craftsmanship of the men and women at Rainier rivals the best yards in the world, and these vessels reflect their desire to provide a world-class product to the mariners that will sail on them. The Nicole Foss is truly a job well done.”

Nicole Engle, the vessel’s namesake and one of three sisters who are primary shareholders of Saltchuk, the parent company of Foss Maritime, spoke of one of Saltchuk’s core values to reinvest in the family of companies, “seeing this promise become a reality with the three Arctic tugs is truly amazing.”

The Nicole Foss and her sister ships are ice class D0, meaning that the hulls are designed specifically for polar waters and are reinforced to maneuver in ice. The first of the three Arctic tugs, the Michele Foss, made her debut in 2015, and in her first year of operation led the way in safely pioneering a new route across the North Slope, while operating in extreme conditions of first year ice a meter thick. The Denise has also continued to exceed expectations and will return to the far north this summer.

The Nicole Foss complies with the requirements of the ABS Guide for Building and Classing Vessels Intended to Operate in Polar Waters, including ABS A1 standards, SOLAS and Green Passport. She has two Caterpillar C280-8 main engines; a Nautican nozzle and rudder system to provide superior bollard pull and maneuverability; and Reintjes reduction gears. Markey Machinery supplied the tow winch.

The tug has a bollard pull of 221,000 pounds and incorporates several environmentally focused designs and structural and technological upgrades, including: