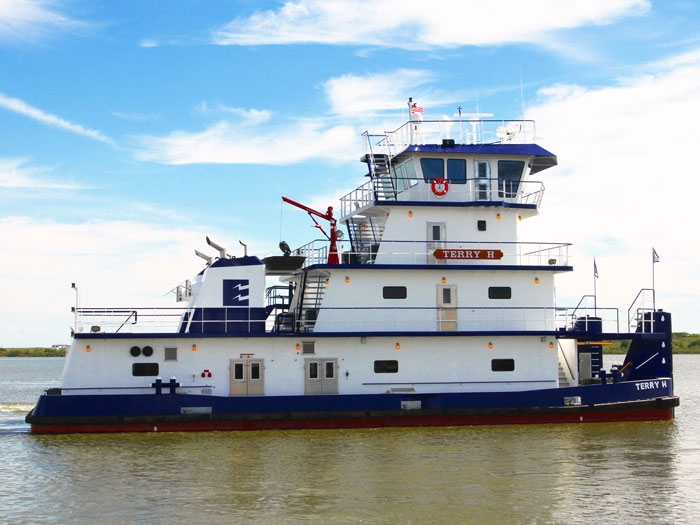 OCTOBER 28, 2014 — Houma, LA, based Enterprise Marine Services, a subsidiary of Enterprise Products Partners L.P., is making a major commitment to Z-drives for the U.S. inland waterways. It currently has four Z-drive towboats in service and has taken delivery of two new Z-Drive vessels from Sneed Shipbuilding, Inc., Channelview, TX, with three more under construction.

The new vessels, the Sheridan A and Terry H, measure 87 ft by 34 ft by 11.5 ft and have a 34 ft 10 in wheelhouse eye level.. Each is powered by a pair of 1,000 hp. Cummins QSK 38M, Tier III, diesels coupled to Z-drives from ZF Marine. Electrical requirements are met by two 85 kW, Cummins QSB7 generators meets the electrical needs for the towboats. Tankage of these boats include: 30,000 gallons for fuel, 16,000 gallons for water and 500 gallons for lube oil. They are the first two of five similar boats being built for Enterprise by Sneed.

The John Bludworth Shipyard of Corpus Christi, Texas has previously delivered the Freedom, Valor, the Jeris Authement and the Nolan Rhodes to Enterprise Marine Services. Designed by John L. Bludworth, III, they are slightly different from the Sneed boats, measuring 86 ft by 34 ft by 11 ft with a 34-ft eye level wheelhouse view.

All of the new Enterprise Z-drive boats will push double-hulled 30,000 -barrel tank barges on the inland waterways and the Mississippi River.