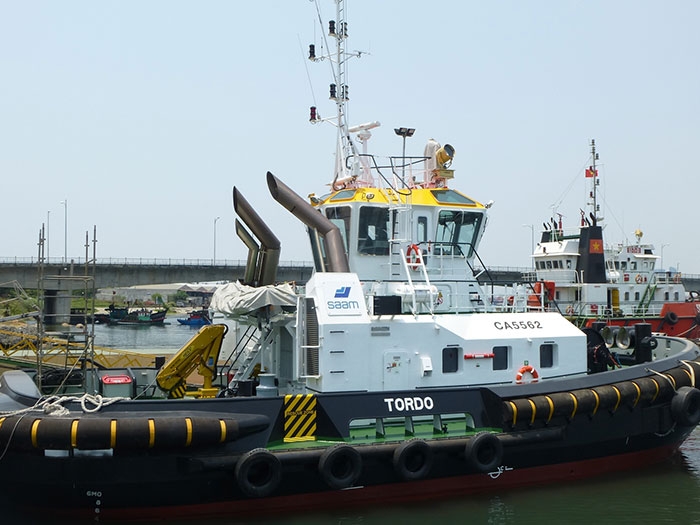 Tordo, one of two Damen ASD 2411 tugs that will soon start work in San Antonio, Chile

These compact yet powerful 24 m long vessels deliver over 70 tonnes of bollard pull and are exceptionally maneuverable and reliable.

The order was placed just three months ago, following a visit by SAAM representatives to Damen Song Thu Shipyard in Vietnam where the vessels were already in build for stock.

The decision to go ahead with the purchase was based on Damen’s ability to combine high build and service quality, flexibility and fast delivery times, even when, as in this case,  special modifications are required.

SAAM is an established Damen client. In October 2015, SAAM SMIT, a joint venture formed in 2014 between SAAM and Dutch company Royal Boskalis Westminster N.V., placed an order for an ASD Tug 2913, which was delivered in March 2016 and is now operating in Panama. With 80 tonnes of bollard pull, she is ideal for assisting vessels through the expanded Panama Canal.

SAAM also purchased three Damen Stan Tugs between 1995 and 1999, and another two Damen ASD Tugs 2411 are currently in build at Wilson Sons in Brazil.

The two new tugs, named Tordo and Mirlo after Chilean birds, are now on their way to Valparaiso, Chile. Once fully commissioned they will begin harbor operations in the port of San Antonio. Damen will also be providing crew training and a range of other support services in Chile.

“It was indeed interesting to be directly involved in the acceptance process for these two versatile tugboats,” said Pablo Caceres, Technical Manager for SAAM Towage. “Not only are the vessels performing above SAAM expectations, but the experience of working with a Damen project management and production team fully committed to delivering a high quality product in terms of performance, presentation and seaworthiness was a very positive one.”