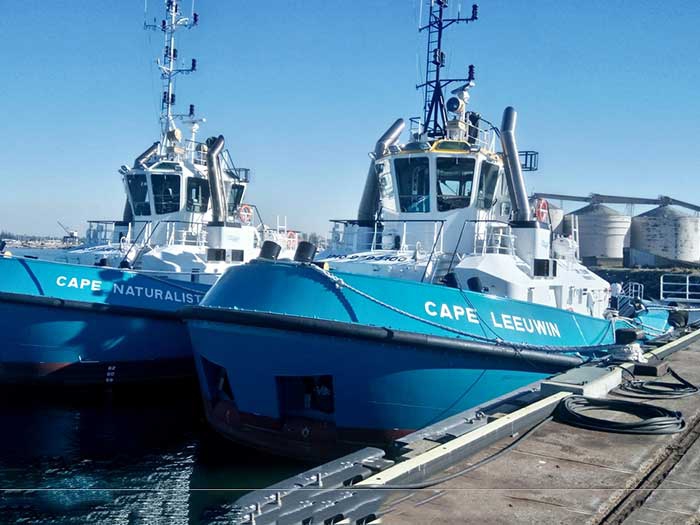 Named Cape Naturaliste and Cape Leeuwin after local landmarks, they will be used for operations in Bunbury Port, on the south-west coast of Western Australia.

The compact, heavy duty tugs have a bollard pull of over 70 tonnes, a top speed of over 12 knots both ahead and astern and a powerful aft winch, making them well suited for continuous and effective harbor towage activities.

Mackenzie Marine & Towage (MMT), a fourth-generation, family-owned company, has been the harbor towage operator in the nearby port of Esperance since the 1970s. The company bought its first Damen tug, the ASD 2411 Shoal Cape, in 2006 and a second of the same class in 2013, named the Hellfire Bay.

In 2014 the merger of the Esperance Port Authority, the Albany Port Authority, and the Bunbury Port Authority led to the establishment of the Southern Ports Authority. In 2016, the new authority put out a tender for towage operations in the ports of Esperance and Bunbury. With MMT already well established in Esperance with the two ASD Tugs 2411 it consulted with users of Bunbury Port about their needs. The feedback was that tractor tugs would be preferred and so, by offering two, state-of-the-art ATD 2412 Twin Fin tugs, MMT was able to secure the combined licence for Esperance and Bunbury.

The award of the towage license was announced in September 2016 and operations were required to start just two months later. The very tight time frame meant that MMT was not able to inspect the shipyard or the vessels that Damen had ready in stock before placing the orders. However, managing director Sean Mackenzie trusted Damen to deliver to the required standards and went ahead and placed the order. Damen also arranged the required financing for the vessels in time for delivery.

Forty guests attended yesterday’s naming ceremony, at which champagne was carefully poured over the bows of each vessel and Southern Ports Authority CEO Nicholas Fertin was among the attendees who made a short speech. At the event, Southern Ports harbor master Captain Gary Wilson noted that the tugs will be kept busy with more than 450 large vessels requiring docking assistance every year.

“Mackenzie Marine and towage is extremely happy with the delivery and performance of the new 2412 tractor tugs that we have received from Damen,” said Sean Mackenzie. “MMT has built a wonderful relationship with Damen over the last ten years so we know we can trust them to have the very best tugs and back up support in Australia. We are looking forward to being able to build this relationship further into the future.”