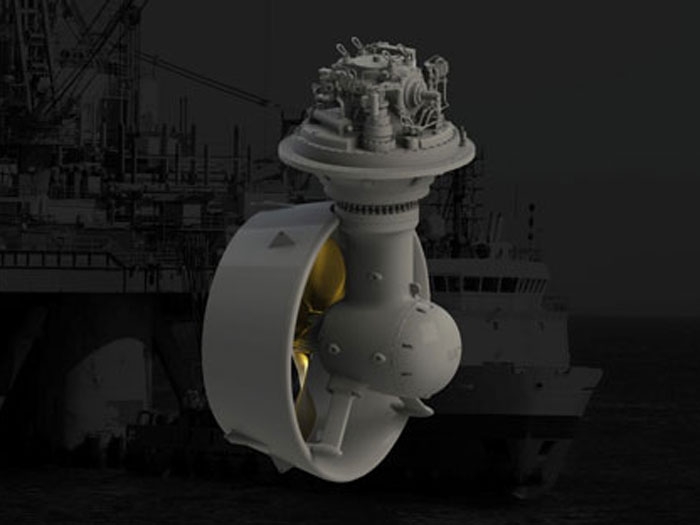 JUNE 2, 2015 — A newly integrated propulsion package from Caterpillar Propulsion targeting the tug market will feature a new range of azimuth thrusters developed to match the highest performance with the most competitive cost.

The 60 tonne bollard pull Cat Propulsion Marine Thruster Azimuth (MTA) is the first model in what will become a new family of rotatable units optimized for tug operations, with an initial unit expected to be delivered into a commercial trial by the end of 2015.

The new MTA range has been tailored to optimize performance when working as part of an integrated propulsion train and will be made available through the extensive Cat dealer network.

The complete package for tugs will include engines, high speed shafting, controls and clutches. The MTA’s consoles will display and control engine and thruster functionality.

“This MTA is a key component in our concerted drive to bring the twin benefits of performance excellence and economy to the tug market,” Jim Johnson Caterpillar Propulsion general manager said. “The harbor tug sector is intensely competitive, but it is also a market that will benefit in terms of bollard pull and reliability from a consolidated control-engine-thruster package where component parts are optimized to work together.”

“There is no question that customers will benefit from a single source supplier offering competitive pricing and an unrivaled network providing product support,” said Mr.Johnson. “Tugs are the industry workhorses that are expected to deliver whatever the backstory; tug operators certainly appreciate having a local single point of contact for service support.

“Caterpillar Propulsion has made simplified installation and easy access for maintenance priorities as part of the new thruster development, without compromising the conservative design principles on which it has built its reputation. The clutch and the mechanical PTO will be contained in a single unit, while the thruster and engine assembly can also be installed as a complete unit

“With its 60 tonne bollard pull capability, our first MTA is aimed at the volume end of the tug market, reflecting the strong share achieved by Cat marine engines in this segment,” says Mr. Johnson. “Ultimately, up to six different MTA sizes will be available to cover a wide range of tugs, all of which will be supported by the Cat dealer network worldwide.”