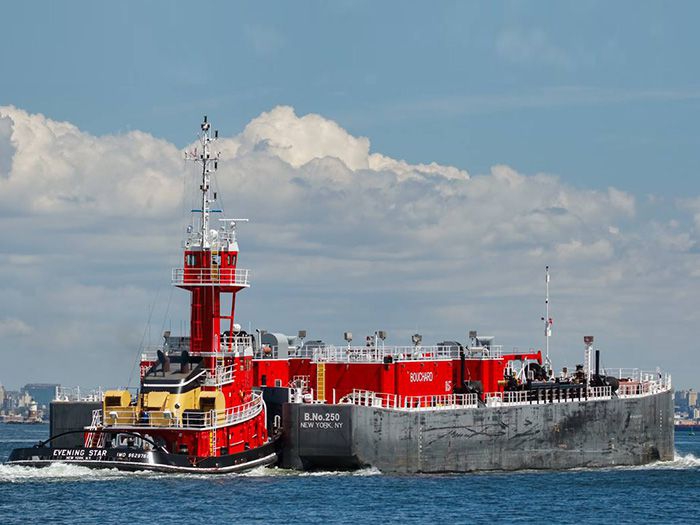 Bouchard Transportation recently ordered a new ATB unit that will be a sister vessel to the Evening Star and B No. 250

JANUARY 5, 2018—This year, Melville, New York-based Bouchard Transportation Co. celebrates its 100th anniversary. While the family-owned operator has a well-established reputation of providing safe, reliable transport of petroleum products in the Jones Act trade, few people may be aware of how it all got started.

The story of Bouchard Transportation Co. begins with an act of heroism in the summer of 1916,

before the United States entered World War I. On July 30, 1916, while on watch at about 2 a.m. on the tug C. Gallagher of the Goodwin, Gallagher Sand Co. in New York Harbor, Captain Fred Bouchard (photo inset at right) witnessed the infamous Black Tom Explosion. German saboteurs had set fire to 1,000 tons of World War I munitions on the Black Tom pier in Jersey City, NJ. The munitions were to be shipped to Germany’s enemies— Britain, France and Russia. The explosion was so large that it damaged the Statue of Liberty with shrapnel, shattered windows in Times Square and St. Patrick’s Cathedral, and was felt as far away as Maryland.

Undaunted, Captain Bouchard steered his tug from the Long Dock at Erie Basin in Brooklyn toward the catastrophe on the New Jersey shore. Enduring continuous explosions that blew out the windows and lights of his tug, he helped to rescue the 4,000-ton steamer Tijoca Rio, and the wooden schooner George W. Elezy of Bath, ME.

In May 1917, the U.S. District Court issued Captain Bouchard a salvage award, as well as an award for personal bravery, for a total of $9,000. He promptly invested this money to create his own company—Bouchard Transportation Company.

BUILT ON SAFETY
Since it was established by Capt. Fred Bouchard 100 years ago, Bouchard Transportation has grown under the leadership of generations of Bouchard family members to become the largest independently owned petroleum barge company in the U.S. It owns and operates a fleet of 25 tugs and 26 tank barges, some of which are among the largest double-hull oil barges in the Jones Act trade. Its massive Articulated Tug Barge (ATB) units—some as large as 260,000 barrels in capacity—are a regular sight in New York Harbor.

Bouchard Transportation has been built on reliability, safety training, and investing in some of the most technologically advanced equipment available.

Bouchard’s Safety Management System (SMS) requires each vessel to be routinely vetted and evaluated annually and semi-annually.  Additionally, each tug and barge is continuously assigned routine maintenance and repair schedules to guarantee that the equipment is always operating at the most optimal level.

“Our safety and vetting procedures, as well as the technological advancements consistently being made to our fleet allow for an efficient operation that limits risk by providing environmental protection, a safe work environment for the crew, and a reliable service for customers,” says President & CEO Morton S. Bouchard III.

Mr. Bouchard, a fourth generation family member, was inducted into the International Maritime Hall of Fame in 2013.

These ATB units feature the newest generation of the Intercon and pin coupling system, as well as the most technologically advanced equipment in various spaces that are designed to reduce total emissions, thus ensuring a more environmentally sound vessel.

For its anniversary, Bouchard has unveiled a new logo that will be featured in all its media and marketing materials.

In 2010, the fifth generation of the Bouchard family became involved in the day-to-day operations and you can be sure that the company will be continue to be guided by the principles its was built on: safety, reliability, and environmental protection to serve its customers in the marine petroleum transportation business.