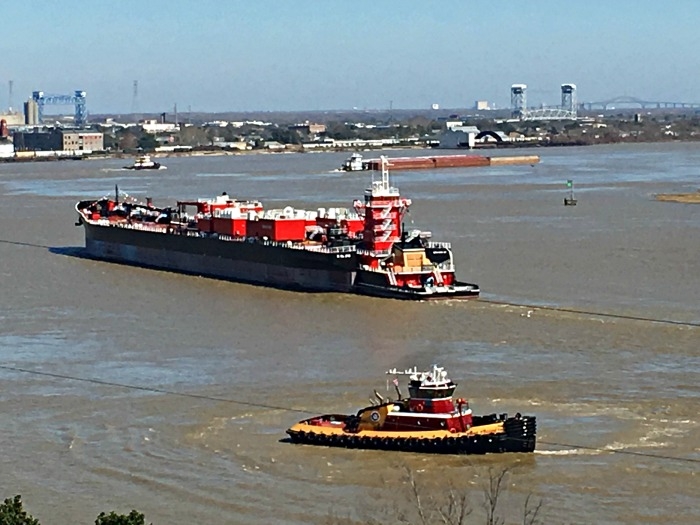 Bouchard Transportation's Articulated Tug Barge unit Donna J. Bouchard and B. No. 272 sailing down the Mississippi River following christening ceremonies at the Port of New Orleans

At the ceremonies, Bouchard Transportation President and CEO Morton S. Bouchard III noted that the Donna J. Bouchard and the B. No. 272 were some of the final vessels that would be delivered under the company’s major fleet expansion plan. The remaining elements under that expansion plan are the 6,000 hp ATB tug Fredrick E. Bouchard being built at VT Halter Marine, Pascagoula, MS, and the lengthening of an existing oceangoing tank barge to increase its carrying capacity at Bollinger Shipyards, Lockport, LA.

The Articulated Tug Barge (ATB) unit was christened with the traditional breaking of the bottle of champagne across the bow by Joan Lesniewski, wife of Robert Lesniewski, Global Marine Commercial Manager, ExxonMobil Corporation/SeaRiver Maritime.

“We have a strong relationship with Halter and Sid (Mizell, Senior Vice President, Business Development at VT Halter Marine) that goes back 50 years,” said Mr. Bouchard (pictured at left).

“Celebrating the christening of the M/V Donna J. Bouchard and B. No. 272 signifies another major milestone in developing a modern, fuel-efficient, well-specified, reliable, and—most importantly—safe fleet, capable of supporting the exacting requirements of the offshore industry around the world,” said Mr. Bouchard. “Our expansion continues to be driven by our founding fathers and four generations of Bouchard’s philosophy of investing our profits in new, modern equipment to service out customers in the most efficient, and environmentally safe manner possible—a high quality service that customers have come to expect from Bouchard Transportation for close to 100 years.”

ExxonMobil Energy Ltd. Chairman and Managing Director Jim Muschalik said that ExxonMobil and SeaRiver Maritime have had a decades-long relationship with Bouchard, which “has met or exceeded the high safety standards that we set.”

The Donna J. Bouchard is a 150 ft, 10,000 hp, twin-screw ATB tug and is classed by ABS as ✠A1 Towing Vessel, Dual Mode ATB, USCG Subchapter M, and is equipped with an Intercon Coupler System.

The ATB unit was designed by renowned naval architectural firm Guarino & Cox, LLC, Covington, LA, whose principals Sal Guarino and Greg Cox have developed designs for everything from ATBs to offshore support vessels to yachts.