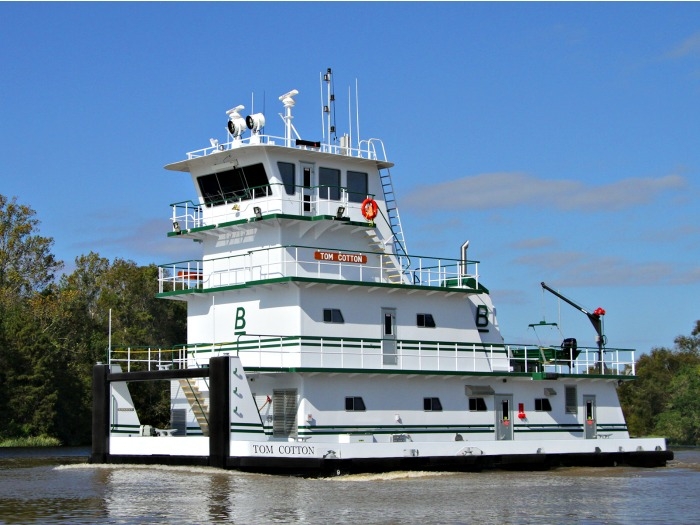 To push these barges, Blessey has a fleet of over 85 towboats, ranging from 700 to 3,200 horsepower.

Blessey Marine owner Walter E. Blessey, Jr., has a tradition of naming each new boat in honor of either a long time employee or an industry-supporting politician. Its newest towboat is the 1,320 hp M/V Tom Cotton, named for recently elected Senator and military veteran from Arkansas. At 38, Senator Cotton (R-AR) is currently the youngest serving member of the Senate.

Built at Verret Shipyard in Plaquemine, LA, the 70 by 30-foot M/V Tom Cotton has a molded depth of 10 ft 8 in and a design draft of 8.5 ft. Air draft, with the radar/mast up, is 49 ft 11 in, with the mast in the lowered position the air draft reduces to 43 ft 11 in. The eye-level view at the design draft is 33.5 ft. Accommodation is provided for up to seven crewmembers in five staterooms.

In addition to a full range of electronics and navigational equipment, the towboat is fitted with two Furuno radars, a depth sounder, satellite compass and DeHart Swing meter. It also has a Blue Box voyage recording system and a Baton Rouge Marine Electric incapacitated wheelman alarm.