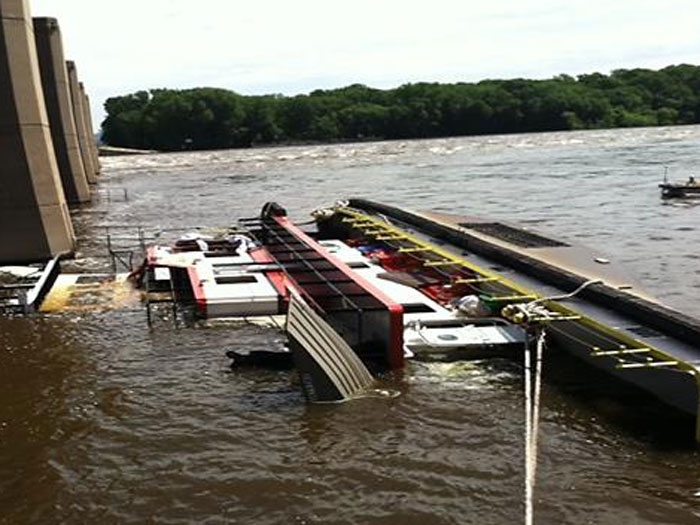 The Megan McB lying on its port side south of gate no. 1 of Lock and Dam 7 on the Mississippi River. The photo looks northeast across the river

SEPTEMBER 18, 2014 — The National Transportation Safety Board has issued a Marine Accident Brief (MAB 14-17) on the July 3, 2013 capsizing of the towing vessel Megan McB in which one crew member died.

At 0558 local time on the day of the incident, the Megan McB lost engine throttle control while the crew was trying to maneuver the vessel into the main lock of Lock and Dam 7 on the Mississippi River near La Crescent, Minnesota. Without engine throttle control to maneuver the vessel, the strong river current swept the Megan McB into gate no. 1 of the dam, where the vessel became pinned and capsized. One crew member died in the accident. The vessel was later refloated; its damage was estimated at $500,000.

Owned by Brennan Marine Inc. of La Crosse, Wisconsin, the Megan McB was a new vessel placed in service in the spring of 2013 and the only vessel in the Brennan Marine fleet equipped with electronic engine control throttles (as opposed to air throttles). One of the aspects of the electronic throttles was that each time the vessel’s diesel engines were started, the “station select” button needed to be pressed on the electronic control head. The control head controlled both the marine transmissions (forward and astern controls) and the main diesel engines’ speed. If the station select button on the control head was not pressed after engine startup, the electronic throttles would not control the engines.

The pilot who would operate the Megan McB at the time of the capsizing joined the vessel crew in the middle of a shift, at 0100 on the morning of the accident. He had been called in unexpectedly because the pilot originally scheduled to operate the vessel that day had received a phone call that his wife had been in a car accident.

The accident pilot told investigators that he had never previously served as the Megan McB’s pilot. He had only piloted Brennan Marine vessels equipped with air throttles.

When the pilot prepared to maneuver the Megan McB into the main lock of Lock and Dam 7, he radioed for the crew to let go the mooring line. The deckhand proceeded to the bow and removed the line from the mooring pin on the pier. The pilot then attempted to engage the engines by moving both throttles forward on the electronic control head; however, because he had not pressed the station select button, the engines did not respond. The pilot told investigators that he did not know that he had to press this button to control the engines; he had received no instruction in using the electronic control head.

Without engine throttle control to maneuver the vessel, the strong river current swept the Megan McB into gate no. 1 of the dam, where the vessel became pinned and capsized. The vessel was later refloated; its damage was estimated at $500,000. The pilot and first mate were able to escape through the wheelhouse windows, which the strong current had broken, but the deckhand was missing. About 1300 that afternoon, divers located his body on the second deck of the Megan McB’s superstructure.

The National Transportation Safety Board determines that the probable cause of the capsizing of towing vessel Megan McB was the replacement pilot’s unfamiliarity with the vessel’s electronic engine control throttles, which resulted in his inability to avoid gate no. 1 of Lock and Dam 7. Contributing to the capsizing was Brennan Marine’s lack of effective procedures to ensure that the Megan McB was operated by a replacement pilot familiar with the electronic engine control throttles, which were unique to this one vessel in the company fleet.