The NTSB has issued its report on a May 23, 2019, incident in which two loaded barges, the MTC 7256 and LTD 11140, struck the Webbers Falls Dam. The barges had broken away the previous day from a fleeting area on the Grand River in Muskogee, Okla., during historic flood waters and high river current. The two barges were total constructive losses. No pollution was reported. Total damages exceeded $4.7 million, including the amount spent to remove the barges and repair the dam ($3,956,249).

​The National Transportation Safety Board determined that the probable cause of the barge breakaway and contact with the Webbers Falls Dam was the force of the river current acting on the moored vessels at the Grand River fleeting area, which exceeded the capacity of the mooring wires, due to the extreme rise and flow of water in the Grand River as the Fort Gibson Dam released major amounts of water in a short period of time.

As always with these reports, the bare bones summary doesn’t even begin to tell the story of what the full report reveals to have been a more than challenging, more than three-week long journey.

The barges had begun their journey on April 30, 2019, when the Southern Towing Company towing vessel Dennis Collins departed with them from the Tulsa Port of Catoosa, Okla., at Mile 442 on the Verdigris River. From April 30 to May 21, very heavy rainfall in excess of 15 inches fell in southern Kansas and northern Oklahoma saturating soil and resulting in major and record flooding for many rivers. While the Muskogee, Okla., area, where the casualty occurred, had a lower rainfall, the area still experienced severe flooding as the Upper Arkansas, Verdigris, and Neosho river basins, which merge into the Arkansas River in Muskogee, all received heavy rainfall.

The Dennis Collins captain was concerned by the river’s high water, so he pushed the tow into the bank at Mile 423 on the Verdigris River. He stayed upriver waiting for the river conditions to improve, but lacking “access to water, fuel [including fuel for the barge cargo tank refrigeration system, powered by diesel engines and], groceries,” the captain and the vessel’s port captain agreed to move the vessel to Muskogee on May 13.

At the time, the river in Muskogee was near flood stage and had a current of
3 knots. Using shore wires, the Dennis Collins and its two barges moored in the barge fleeting area on the left descending bank at Mile 394 of the Grand River, where it met the Arkansas River.

Early in the morning on May 21, the Arkansas River near Muskogee rose above flood stage of 28 feet, and the captain of the Dennis Collins was permitted to move farther up the Grand River. At 8:05 a.m., the crew of the Dennis Collins, with the assistance of the towing vessel Legacy, backed up about 1,000 feet into the Grand River and attached two lines from the A F 15 to the barge MTC 7256. The MTC 7256 was secured abreast of the LTD 11140; both were loaded with diammonium phosphate. The LTD 11140 was secured to a mooring cell anchored in the riverbank, near the power lines that crossed the Grand River, with two fleet mooring wires, one at each shoreside corner. The Dennis Collins crew supplemented the LTD 11140 mooring by running a third line from the LTD 11140 midships cleat to a tree trunk.

The Arkansas River and the Grand River continued to rise, and both rivers rose above major flood stage early morning on May 22. The captain noticed that the third line they had added was not long enough, so the crew removed it and replaced it with a third fleet wire, marked with a floating propane cylinder. The captain also brought the towing vessel’s engines on line and kept them in reverse at clutch speed in order to reduce the current’s strain on the fleet mooring wires as, he told investigators, the flow of water in the Grand River “got real bad.”

To find out what happened after that, download the full NTSB report HERE. 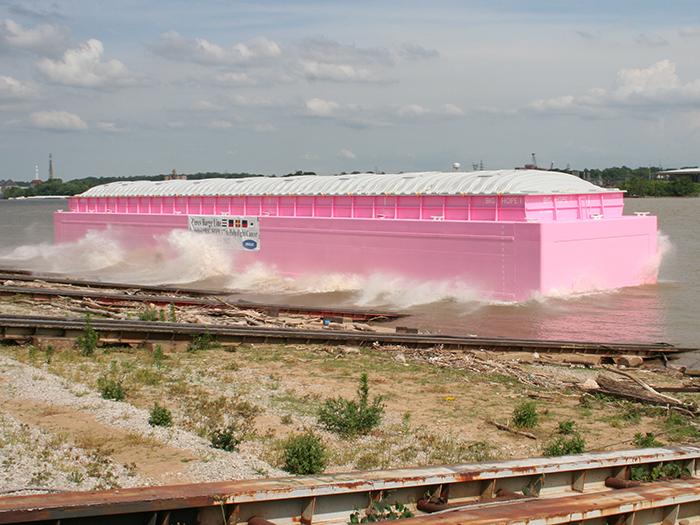 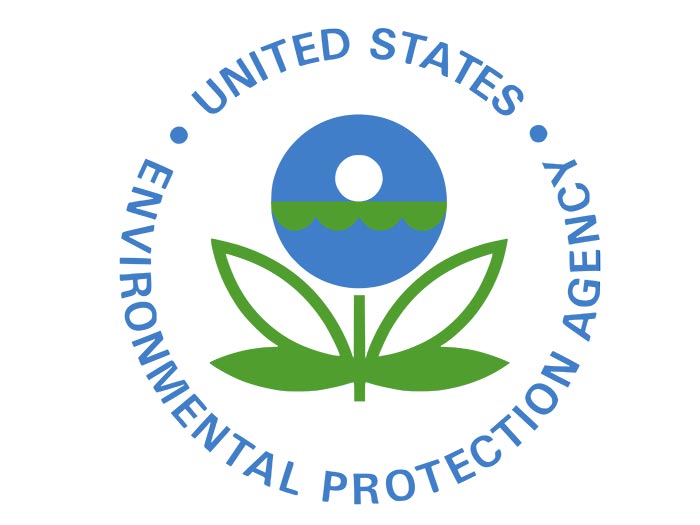 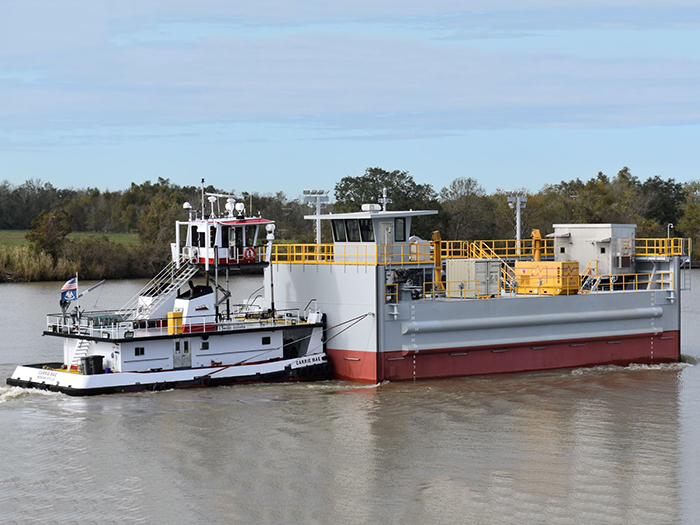