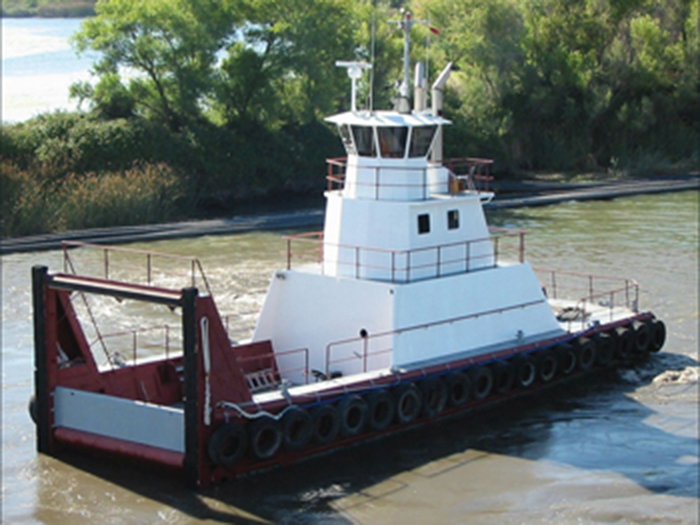 Pushboats currently listed for sale by Marcon include this 73 ft 6 in long vessel originally built in 1954 and subsequently rebuilt and repowered. [IMAGE: Marcon International]

Coupeveille, Wash., based shipbroker Marcon International had 57 U.S.-flag pushboats listed for sale as of May, but reports no sales thus far this year – reflecting an S&P market that, it says, has been having a rough ride.

The firm has just published its latest Inland Pushboat Market Report. Of the 779 inland river pushboats that the firm currently tracks, 73 were officially on the market for sale (57 U.S. flag and 16 foreign flag) as of May. Seven of the boats whose ages are listed were built within the last ten years; 38 boats are forty-five years of age or older. The oldest listed was built in 1944, a 76-foot, 1,110 bhp vessel in the U.S. Northwest. This is counterbalanced by a 2019-built, 56-foot, 1,500 bhp U.S. flag pushboats located in the U.S. Northwest. Marcon also has 10 inland river pushboats listed for charter – six U.S. and four foreign.

The number of pushboats officially on the market for sale is down 25, or 25.77%, from Marcon’s last report published in August 2019.

Marcon notes that it currently has no pushboats listed with horsepower greater than 5,000 hp, reflecting that higher horsepower units are working consistently despite the current events.

The full report goes into detail on the age profile of the vessels currently offered, noting that, for now, only 9.59% of the push boats available are less than 10 years old, up from the 7.37% reported one year ago and from the 7.46% reported five years ago.

Most of the inland river pushboats Marcon has listed for sale are located in the U.S. with 55 vessels or 75%; followed by nine or 12% in Europe, three with “undisclosed” location, two in the Caribbean and one each in Canada, the Far East, Latin America and the Mid East.

“Pushboats need barges to push,” notes Marcon. “It appears that there are plenty of barges in the market, but whether they need to be pushed anywhere, or not, will have an effect on the demand for tonnage. Currently Marcon does not have any sales of pushers to report, and the sale and purchase market continues to be having a tough ride – at least on the dry cargo side of the market.

“During the first quarter of 2020, we saw in the inland river systems of the United States an expected drop in freight activity due to the effects of the COVID-19 shutdowns, decreasing consumer demand domestically and decreased manufacturing output. All of these had a major impact on the entire dry market segment. The record setting flooding during 2019 (292 days lasting from Spring through mid-August was unprecedented), and this 2020 season has started out similar to 2019 causing fears of a repeat of last year’s difficulties. High water levels and spring flooding will always have an impact on the market, which also delay plantings, causing reduced demand for fertilizer heading north in the early part of the year. This current season’s sustained high-water conditions have already made it difficult to move cargo and there have been additional delays caused by unplanned closures. Delays to infrastructure projects have also helped to trigger overcapacity, which can be an impetus for consolidation and buyouts. All of this continued downward trending activity will only lead to more idling of equipment and a corresponding fallout of demand.”