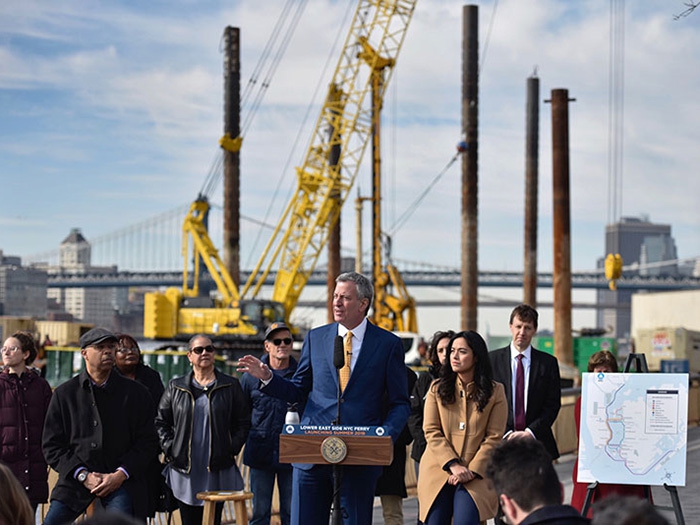 Mayor de Blasio : We can't wait to launch two new ferry lines that will help New Yorkers get to work and to school, and to connect with their city

The dock is one of four new landings for two new ferry routes slated to open this summer, shortening commutes for New Yorkers traveling to and from the South Bronx and Lower East Side. When service launches, nearby Lower East Side residents will have a 9-minute ferry ride to Wall Street or a 17-minute ride to Midtown, versus a 13-minute walk just to get on the nearest subway.

The Soundview Route, also launching this summer, will serve an estimated 400,000 riders traveling to and from the Soundview area of the Bronx, East 90th Street, East 34th Street and Wall Street/Pier 11 in Manhattan each year.

“Docks are under construction and new ferries are on the way for this summer’s new service. Neighborhoods like the Lower East Side haven’t had the transit options they deserve. We can’t wait to launch two new ferry lines that will help New Yorkers get to work and to school, and to connect with their city,” said Mayor de Blasio.

Four docks are being constructed at Corlears Hook, East 90th Street, and Stuyvesant Cove on the East River and at Clason Point Park in the Soundview Section of the Bronx. Construction of the ferry docks requires embedding piles into the East River to secure the ferry landing barge, support the gangway and guide the ferry vessels into the landing, as well as installation of the access gangway onto the barge. Additional shore-side work will also be required, including installing utilities, security gates and signage.

Last year, NYC Ferry’s inaugural year, the system launched four routes, the Rockaway, Astoria and South Brooklyn and East River routes, and served nearly three million riders, surpassing initial projections by 34 percent or nearly 800,000 riders. With the Lower East Side and Soundview routes, the system will have a total of six routes.

In response to high demand, NYC Ferry is adding six higher-capacity boats to its fleet. These bigger boats are each outfitted with larger engines and designed to hold up to 349 passengers. The first three of these larger vessels are expected to arrive in the New York Harbor over the summer.

“New Yorkers are ‘hooked’ on the Harbor and all the new community connections NYC Ferry has provided to millions of riders since launch. We’re one step closer to expanding the system later this year with the creation of new links and opportunities for our growing waterfront neighborhoods,” said Cameron Clark, Senior VP for NYC Ferry operated by Hornblower.

NYC Ferry is hiring captains and deckhands for the summer 2018 season. Jobseekers can apply directly through Hornblower’s website, www.ferry.nyc.