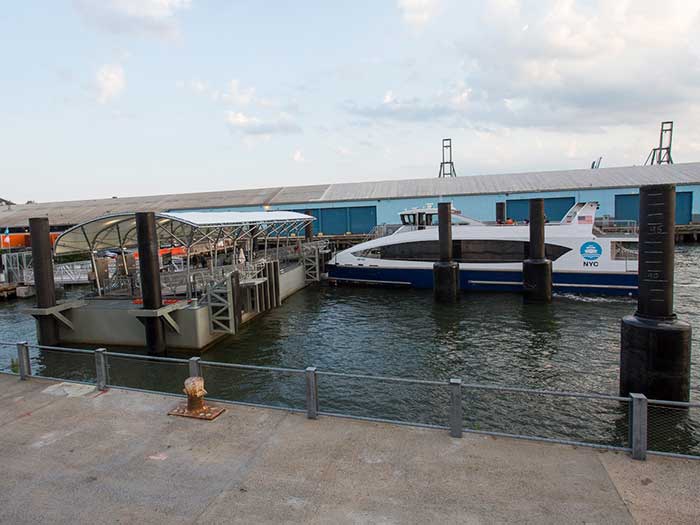 AUGUST 9, 2017 — New ferry landings have opened on the NYC Ferry South Brooklyn Route in Bay Ridge, Atlantic Basin, and Brooklyn Bridge Park (Pier 6), in New York Harbor. The NYC Ferry landings were designed by McLaren Engineering Group as part of New York City Economic Development Corporation’s (NYCEDC) NYC Ferry Service which launched in May 2017. The landings, estimated at $55 million, are integral to the new NYC Ferry service that connects New Yorkers to hundreds of miles of the City’s waterfront.

“McLaren is honored to be part of this monumental project,” says Malcolm G. McLaren, president and CEO, McLaren Engineering Group. “We helped develop the floating landing concept in New York harbor and have been for improving on it for more than 30 years. Our extensive experience prepared us to quickly design landings that link the city’s boroughs in a safe and efficient manner.”

“After studying the proposed landing sites to ensure the locations were viable, we implemented our fast track designs, which we have refined over the last 30 years. We then determined how to get the riders safely onboard, power to the site, and how to minimize the impact of the landings on the surrounding neighborhood,” says Shea Thorvaldsen, marine division manager, McLaren Engineering Group.

“To create a viable low-profile landing, with protection from the environment was a challenge. The canopy and windscreens are always seen as a visual impediment to the environment, and the budgets were tight. In the end, the city now has landings that are accessible, safe, and easily maintained, as well as aesthetically pleasing with the surrounding environment,” says Thorvaldsen.

From Raritan Bay, NJ, to Newburgh, NY, McLaren has engineered more than 60 ferry transportation facilities in the Northeast.

“McLaren’s extensive experience improving the Northeast’s waterways was a tremendous asset on this project,” says Phil Grant of the NYCEDC. “They were able to fast track their designs and lead a team through complicated environmental permitting procedures to complete this project successfully.”

Three NYC Ferry routes are currently up and running. The Astoria route will launch sometime in August, and the Soundview and Lower East Side Routes are slated to launch in 2018.