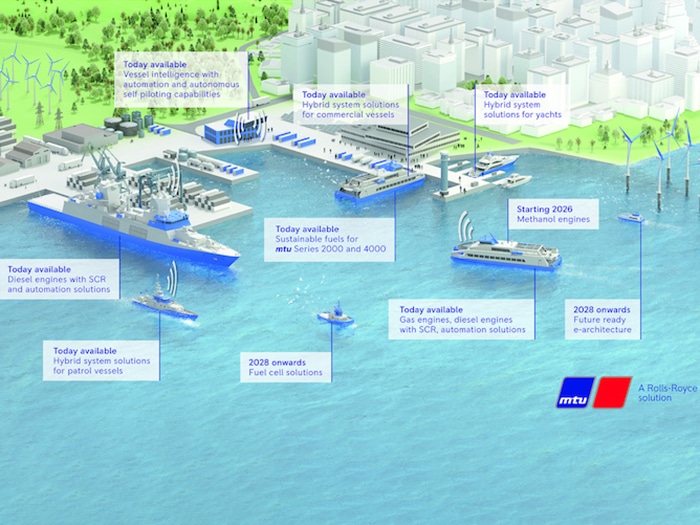 Under the slogan “Pioneering the journey to Net Zero,” Rolls-Royce is showcasing new sustainable MTU marine solutions for propulsion, automation and service at this week’s SMM event in Hamburg.

Rolls-Royce is initially developing methanol engines based on the MTU Series 4000 and will launch them on the market from 2026.

“We are clearly committed to methanol as a marine fuel for the future and want to be a pioneer here,” said Denise Kurtulus, vice president global marine at Rolls-Royce.

The energy density of methanol is high compared to other sustainable fuels, and its liquid state makes it easy to store and refuel at ambient temperatures. In addition to reduced complexity, the more attractive investment costs are another advantage of the methanol tank system.

The MTU methanol engine will operate on the Otto cycle, which has so far been used in the brand’s engines mainly in gas engines. While Rolls-Royce Power Systems has extensive experience with liquid fuel in diesel engines, however, methanol (chemical formula: CH4O) differs fundamentally from diesel in many chemical and physical parameters. These range from specific energy content, density, evaporation properties and ignition energy to viscosity and lubrication behavior.

“The changes required in the methanol engine compared with existing engines are significant,” explains Rolls-Royce mechanical engineer Mathias Müller. “This applies in particular to many subsystems, from injection and turbocharging to the entire cylinder power unit, the lubrication circuits and the engine control system.”

Rolls-Royce can draw on experience from its gas engines to present marketable concepts as early as possible. For example, there is overlap in terms of safety concepts and the modifications required to integrate the engine into the ship. Natural gas and methanol are fuels with a low flash point, for which special safety precautions must be implemented on ships.

Kurtulus is certain that the development effort will be worthwhile. Given the wide variety of marine applications, there will not be a single solution for environmentally friendly marine propulsion systems of the future.

“No such ‘silver bullet’ exists,” says Kurtulis. Instead, she says, there needs to be a variety of solutions based on renewable energies.

Rolls-Royce sees e-methanol as well ahead in the race of innovations as a CO2-neutral fuel. It meets the requirements of an e-fuel because it is produced from hydrogen and CO2 with the aid of wind or solar energy. For on-board storage, it requires significantly less space than would be needed for hydrogen in fuel cell drives or for batteries with the same range. In addition, methanol is less toxic than other e-fuels, such as ammonia. Production costs are also expected to fall faster than those of e-diesel due to economies of scale.

A major plus for ramping up the new technology will be its ability to build on existing infrastructure for methanol.

“Dealing with conventionally produced methanol as a chemical feedstock is now well established in ports and other areas, so switching to e-methanol as a fuel presents comparatively fewer challenges than with other e-fuels,” says Müller. This defuses the “chicken-and-egg” discussion that always arises when new drive technologies are introduced.

Fuel cells powered by hydrogen do not produce any harmful emissions, and while fuel cells powered by green methanol emit small amounts of CO2 because of the required methanol reformer, but no more than was previously bound in the e-methanol and thus operate in a CO2-neutral manner.

Their low noise emissions and vibrations and their very high efficiency (approx. 50 – 60 %) are further advantages that make fuel cell systems interesting for shipping.

Due to its physical properties, says Rolls-Royce, the introduction of hydrogen as a fuel for ships still poses some challenges, for example with regard to infrastructure and on-board bunkering.

The MTU Hybrid PropulsionPack is offered in a power range developing from 1,119 kW to 4,300 kW from the diesel engines plus 165 kW to 743 kW by the electric motors, per powertrain. The maximum propulsion power is 10,000 kW per vessel. To ensure the optimum propulsion solution for each type of ship, Rolls-Royce offers a modular kit with standardized components.