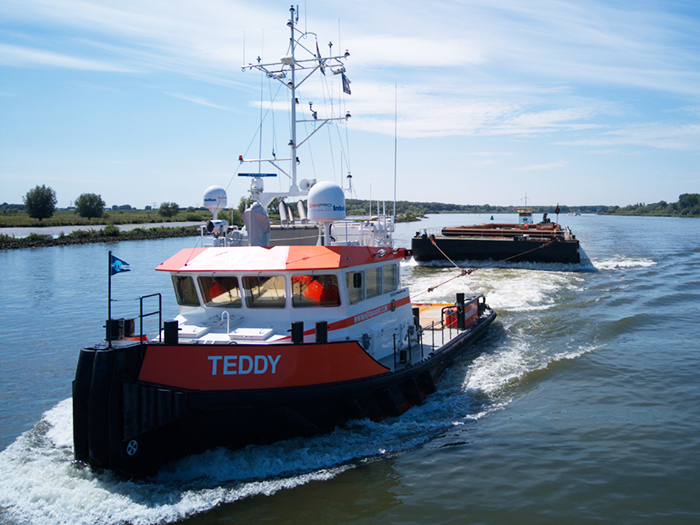 Herman Sr. operates Teddy in offshore waters for a variety of marine projects, from towing and cable pulling to mooring and dredge support.

Looking to increase productivity and operational safety during offshore operations, Barendrecht, Netherlands, based tug and workboat operator Herman Sr. BV is to add a Sea Machines Robotics SM200 wireless, remote-helm control system to one of its Shoalbuster tugboats, the 23.35-meter Teddy.

The SM200 provides wireless helm and propulsion control, as well as remote control of auxiliaries and payload equipment (including pumps, winches, anchor windlasses and more), freeing mariners from the wheelhouse to conduct operations from any location that offers the greatest visibility and safety.

Boston, Mass., headquartered Sea Machines says the SM200 empowers the operator to be in full control of the tugboat and on-board payloads with a direct local view of the task, as compared to conventional methods that often rely on signals relayed from another crew member to the wheelhouse.

Herman Sr. operates Teddy in offshore waters for a variety of marine projects, from towing and cable pulling to mooring and dredge support.

“No longer bound to a fixed control station, our crew will use Sea Machines’ wireless helm to monitor operations from the tugboat’s upper decks or wherever visibility is greatest, a valuable capability that increases both productivity and safety,” said Erwin van Dodewaard, operations manager at Herman Sr. “This system is intuitive to use and, once installed, will be valuable to our crews as they operate our vessel Teddy during challenging projects, such as large and overweight offshore tows.”

“Improving visibility and at-sea safety is a game-changer for any marine operator, but it is especially true for Herman Sr., which operates in challenging offshore conditions that include reduced visibility, waves and weather,” said Frank Relou, European business development manager at Sea Machines. “Working conditions that fall into the ‘dull, dirty and dangerous’ category are ideally suited for our systems, as they support crews with new, innovative capabilities that deliver greater productivity, reliability and safety. We look forward to delivering the SM200 to Herman Sr. and the crew aboard Teddy.”

Earlier this year, in an industry first in wireless vessel control, the U.S. Coast Guard (USCG) and American Bureau of Shipping (ABS) approved the SM200 for installation aboard an articulated tug-barge (ATB) class of U.S.- flag tugboats. The two bodies granted their approvals after an exhaustive review of Sea Machines’ technology and the SM200’s applications aboard these tugs, deeming the system satisfactory for shipboard installation and trials (see earlier story).