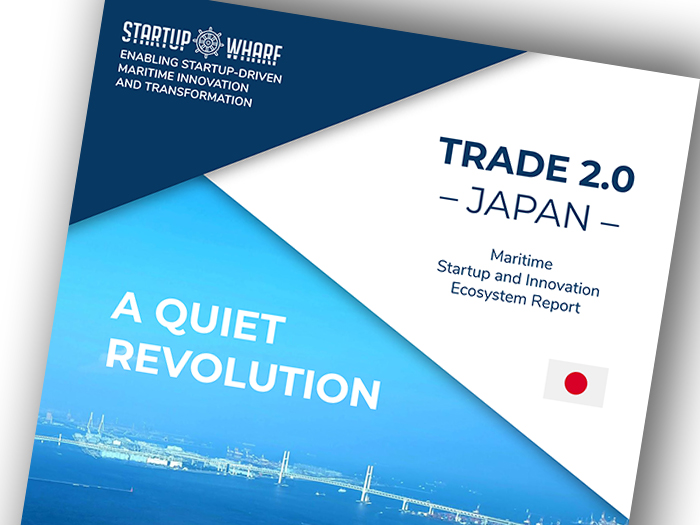 New Inmarsat sponsored report is the first in a series of in-depth profiles into maritime technology and start-ups in specific countries.

Japan’s role and potential as a driver of digitalization in shipping is the focus of a new report sponsored by Inmarsat. The study, “A quiet revolution – the maritime innovation ecosystem in Japan,” explores the commitments to Internet of Things (IoT)-based ship and crew management already made by corporate Japan, then goes on to offer unique insights into the country’s emerging start-up culture.

The report is the first in a series of in-depth profiles into maritime technology and start-ups in specific countries. It builds on “Trade 2.0: How start-ups are driving the next generation of maritime trade,” a global study launched by Inmarsat in 2019. Both studies are the work Nick Chubb and Leonardo Zangrando. Chubb is a former seafarer and founder and director of Thetius Maritime Innovation Intelligence. Zangrando is a naval architect and founder and managing director of Startup Wharf Ltd, which describes itself as an “independent global hub of startup-driven maritime transformation.”

“We are delighted to be the key sponsor of this latest report,” says Ronald Spithout, President of Inmarsat Maritime. “It offers a perceptive insight into the status of Japan’s growing maritime digitalization in 2020.”

“Partnerships have been the bedrock for digitalisation in Japan,” says Spithout. “As the leading provider of high-speed maritime broadband connectivity via Fleet Xpress, we work closely with the large corporate enterprises pushing the technological envelope. However, this new report highlights other important relationships that are also shaping Japan’s digital future.”

Spithout notes that these other relationships include those outside of conventional networks, such as the E5 Lab on autonomous vessels, the Ship Data Center and the Maritime Innovation Japan Corporation.

“We have also seen the Japanese government attempting to grow the local start-up ecosystem through its J-Startup programs, resulting in rising interest from local and international venture investors,” adds Spithout. “Japan’s maritime technology sector is worth $8.8 billion today and is projected as growing to $15.8 billion in value by 2030. Clearly, with innovation remaining the priority, Fleet Xpress connectivity, Fleet Connect and the Fleet Data IoT platform will be key enablers for corporates, their partners and start-ups alike.”