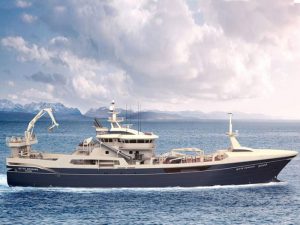 It  will be the largest pelagic fishing vessel within its segment.

The vessel is to be delivered from Havyard’s Myklebust shipyard Q4 2017 and is being built to SALT 0155 design, developed in a close cooperation between the shipowner, design company Salt Ship Design and Kleven.

It will be able to operate in full diesel electrical mode, in diesel mechanical mode or in a combined hybrid mode. A total 7,720 kW of power driving a 5 m propeller will deliver a bollard pull of more than 130 tonnes.

“We are very pleased with a new contract so quickly after Salt in September this year signed its first contract in fisheries,” says Egil Sandvik at Salt Ship Design. “Being assigned another large fishing vessel less than two months later is more than we expected.”

“Unlike the current offshore market, fisheries and fish farming are doing very well and these segments represents an increasingly important market for Salt,” he adds.