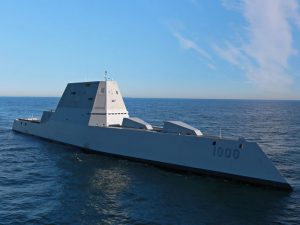 No other details yet, but a couple of photos have been released and a couple of video clips have cropped up on YouTube, all of which show the dramatic difference between the vessel’s stealthy tumblehome hull form with wavepiercing bow and the exteriors of more traditional destroyers.

The “Star Wars” flavor of the ship is not confined to its external appearance: DDG 1000 introduces a wide range of new technologies including Electric Drive/Integrated Power Systems, ship control and damage control automation, and a totally integrated, ship-wide command & control systems. Generating far more power than the DDG 51 ships, DDG 1000 is suitable for future deployment of directed energy beam weapons and the electromagnetic railgun, both of which are under intensive development.