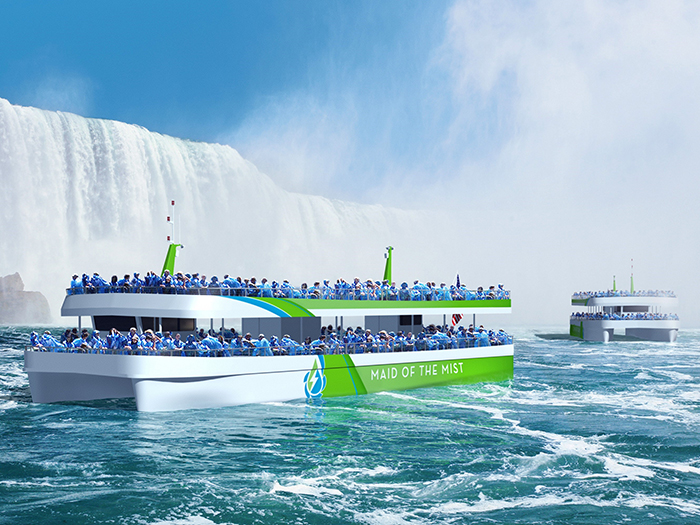 VIDEO: Maid of the Mist orders first all-electric passenger boats to be built in U.S.

New York Governor Andrew M. Cuomo announced today that Maid of the Mist, which has been navigating the waters of the Lower Niagara River since 1846, is preparing to launch the first 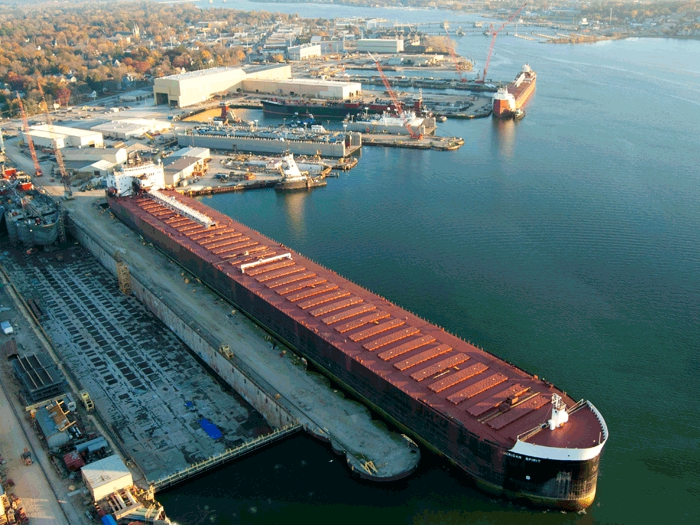 Anyone needing reassurance that the shipbuilding sector in the United States is alive and well need look no further than the Great Lakes. While yards along the U.S. Gulf reshuffle business strategies to help during the down oil market, yards along the Great Lakes continue to work on a number of projects, investing in infrastructure and leveraging partnerships to diversify portfolio offerings.

Since acquiring the Wisconsin yards in 2008, Fincantieri has invested well over $100 million to build a shipbuilding group that will provide flexibility for its customers, and provide construction and repair services to both the government and commercial sectors.

Sturgeon Bay, WI-based Fincantieri Bay Shipbuilding (FBS), which is one of the last boat builders remaining in the Bay, has been essentially non-stop the last couple of years. The yard currently has numerous projects under various stages of construction with a backlog that extends through 2018. Most notably, the projects include newbuilds for one of the most active sectors in the country, the ATB market.

This past May, the yard delivered the Articulated Tug Barge (ATB) unit Barbara Carol Ann Moran and the 110,000 barrel ocean tank barge Louisiana to Moran Towing Corporation, New Canaan, CT. The unit was the third delivery to Moran under a 2014 contract.

What made the delivery of the unit so impressive was that it was delivered on the exact day called for by the contract—emphasizing FBS’ high standards of meeting customer requirements, building a quality vessel and delivering on time.

“We continue to be optimistic about the future of the industry we serve,” says, Todd Thayse, Fincantieri Bay Shipyard Vice President and General Manager.

“This recent acquisition of the former Palmer Johnson facility has been well received by the industry and will allow us to pursue several new construction projects, which may include fishing vessels, ferries and landing crafts, while continuing to serve our core ATB market. These purpose-designed buildings will increase our overall output and capacity and improve our ability to meet critical schedules,” says Thayse.

“We will also be able to move more construction indoors which will allow FBS to further provide cost-effective solutions for our customers,” he added.

Indoor facilities will enable work to be ongoing for both newbuilds and repair work—especially during the winter months when Great Lakes fleet repairs are vital and time sensitive.

Additionally, Keylakes Shipping’s 768 ft bulk carrier John G. Munson is currently undergoing conversion at Bay Shipbuilding. The vessel is the tenth steam-to-diesel, or diesel-to-diesel repowering project that FBS has been awarded since 2009. The freighter, built in 1952 will undergo a complete repower at FBS. It is expected to undergo sea trials in 2018.

Meanwhile, FMG’s two other Great Lakes shipyards are busy constructing the next generation of warships for the U.S. Navy.

Earlier this summer, a keel laying ceremony was held at Fincantieri Marinette Marine, Marinette, WI, for the U.S. Navy’s 17th Littoral Combat Ship (LCS), the USS Indianapolis. The ship is one of six in various stages of construction at FMM, with an additional three ships in long-lead procurement. The yard has already delivered four LCS ships to the Navy—the USS Freedom (the lead ship in the Freedom variant), the USS Fort Worth, the USS Milwaukee and the USS Detroit.

The Lockheed Martin-led team is made up of Fincantieri Marinette Marine, along with naval architectural firm Gibbs & Cox, and more than 500 suppliers across 37 states. The U.S. Navy’s LCS construction program is divided between two groups—the Lockheed Martin team, building the Freedom variant, and the General Dynamics-led team, with Alabama-based Austal USA building the Independence class LCS.

Fincantieri Ace Marine, Green Bay, WI, also has a hand in producing the Freedom variant of the LCS. The yard, which specializes in the design and construction of high-speed coastal intercept and patrol vessels, most notably the builder of the Response Boat-Medium (RB-M) for the U.S. Coast Guard, produces the aluminum superstructures and additional aluminum components for the class.

To top off FMG’s three shipyards success, all three received the annual “Excellence in Safety” award from the Shipbuilders Council of America earlier this year. The award recognizes a shipyard’s commitment to safety, and the hard work and dedication put forth from shipyard employees.

The expansion will include a 68,000 square foot facility that will accommodate a state-of-the-art 770-ton mobile Marine Travelift crane—the largest on the Great Lakes, and third largest in the world.

Great Lakes Group says that with the new facility in place, the Great Lakes Shipyard will be able to continuously provide all services for new vessel construction, as well as custom fabrication, ship maintenance and repairs.

Part of the services Great Lakes Shipyard will offer are those required for Subchapter M. Under Subchapter M regulations, towing vessels greater than 26 ft, or any vessel type moving dangerous or hazardous materials, must obtain a Certificate of Inspection documenting: Drydock inspection; Internal Structure Exam; Annual Inspection and Surveys; and Machinery and Electrical.

Just last month, the yard kicked off construction for the first Damen Stan Tug 1907 ICE. The tug is the first in a series of ten being built in compliance with the new Subchapter M regulations. The tugs are being built for The Great Lakes Towing Company (the Towing Company).

“This new construction program is further evidence of the innovative spirit the Towing Company has always embraced since its founding over 117 years ago, and reflects the commitment we have to our customers and the entire Great Lakes/St. Lawrence Seaway marine transportation industry,” says Joe Starck, President of the Towing Company.

Under the construction program two new harbor tugs will be introduced each year for the next five years—helping to stabilize operations and improve day-to-day business, assures Starck.

“The tugs,” he added, “will be ideal for the long-term sustainability of our harbor towing activities, and provide our customers with an even greater level of reliability, performance, and safety, across our entire Great Lakes service network.”

The Damen Stan Tug 1907 ICE are also the first tugs to be built in the U.S. under Damen’s Technical Cooperation program with Great Lakes Shipyard. The agreement, which was entered into at last year’s Workboat show, authorizes the Great Lakes Shipyard as an official builder of Damen designs for the next five years.

Burger Boat’s diverse portfolio
Since 1863 Burger Boat Company, Manitowoc, WI, has done everything in its power to meet the needs of its growing customer base. The boat builder, which has delivered countless vessel types in the range of 50 ft to 200 ft in length, implements what it calls a “lean” philosophy to its business practice, ensuring procedures are performed and completed on time, and vessels are delivered to customers on budget.

Most recently, Burger began construction on a custom 103 ft 6 in x 26 ft 5 in full displacement steel and aluminum Explorer Motor Yacht for an unnamed owner.

The expedition style motor yacht has a steel hull and aluminum superstructure. The vessel, designed by DeBasto Design, Miami, FL, will be launched Spring 2017. The ABS class yacht will be powered by two Cat C-18 ACERT main engines, and will be able to reach a cruising speed of 12 knots.

Fraser faces OSHA fine
Located in Superior Wisconsin, on the St. Louis Bay of Lake Superior, Fraser Shipyards, part of the Fraser Industries group which also includes boat builders Lake Assault Boats, provides full shipyard services from its sixty five acre site, featuring two dry docks and approximately 2,200 feet of berthing space. Since 1890, Fraser Shipyards has been a prominent fixture in the Twin Ports of Duluth and Superior, serving the Great Lakes shipping community. Most of its current 150 workers, 75 percent of which are structural welders, equipment operators, fitters and pipe fitters, are third generation employees for the company.

That kind of longevity and loyalty from workers can serve as a testament to Fraser’s commitment to the industry, the community and its employees, but recent findings have raised questions about the yard’s safety culture.

Last month, the U.S. Department of Labor’s Occupational Safety and Health Administration (OSHA) announced that sampling results taken during a recent retrofit determined that 14 of Fraser Shipyards workers were exposed to heavy metals and had lead levels 20 times higher than the exposure limit.

According to OSHA’s Assistant Secretary of Labor, Dr. David Michaels, “Fraser Shipyards accepted a contract with a very low profit margin and penalties for delayed completion, but could not meet the schedule without endangering its workers.”

That contract, from Interlake Steamship Company, Middleburg Heights, OH, was for the modernization of the Herbert C. Jackson. OSHA stated in its report that Fraser Shipyards’ management was aware of the presence of lead and asbestos throughout the 1959 built vessel. The ship arrived at Fraser December 2015 for a six-month retrofit project and was required back in operation for the summer iron ore shipping season.

In a statement, James Farkas, President and Chief Operating Officer of Fraser Industries, said “We are a family-owned company that has been in Superior for 126 years. We see all of our employees, laborers and contractors as part of the family.”

He added, “We take the health and safety of our people and our community seriously. We acted to protect our people as soon as we learned of the problem. We have worked with all of our employees, laborers and contractors to ensure their health by bringing in medical experts, as well as the highest levels of testing, protective equipment and safe operating procedures. We strongly disagree with OSHA’s statement that any of the issues were caused or worsened by business or profit motivations.”

The agency cited 14 willful egregious health violations for each instance of overexposing a worker to lead, and cited five additional willful violations for failing to conduct monitoring to assess lead exposure and failing to implement a lead compliance or respiratory program.

Additionally, OSHA issued 10 serious violations to the company, and placed Fraser Shipyards in its Severe Violator Enforcement Program (SVEP). For companies on the list, mandatory follow-up inspections become the norm.

Since the findings, Fraser has taken steps to help mediate the matter, and protect its employees. According to a statement, as soon as the management learned of the high lead levels it halted work on the Herbert C. Jackson. Fraser Shipyards also went on to engage medical experts from the region’s two leading hospitals, and industrial safety experts from the International Brotherhood of Boilermakers union to advise the company and oversee health testing. And it purchased state-of-the-art safety gear and equipment to protect workers.

“We appreciate their responsiveness to getting this issue fixed and taking care our members,” said Mark Garrett, Director of Health and Safety Services for the International Brotherhood of Boilermakers, the union that represents workers at the yard. “We don’t get many employers that step up like they did. They were straightforward, asked for our help and put in place our recommendations for safety.”

In total, Fraser could face close to $1.4m in OSHA penalties. 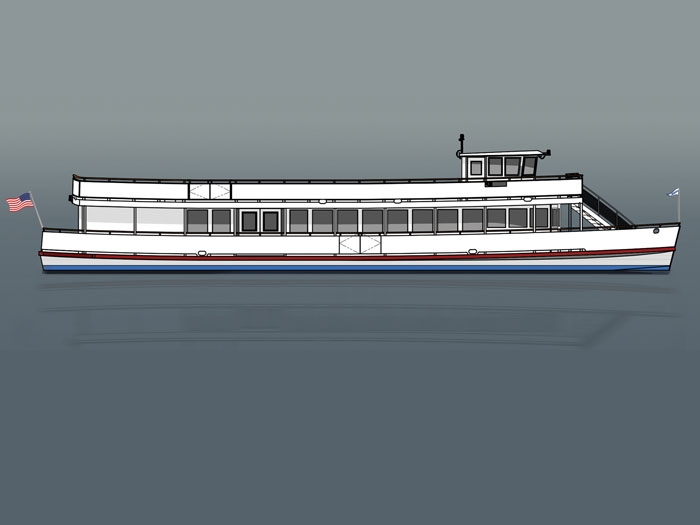