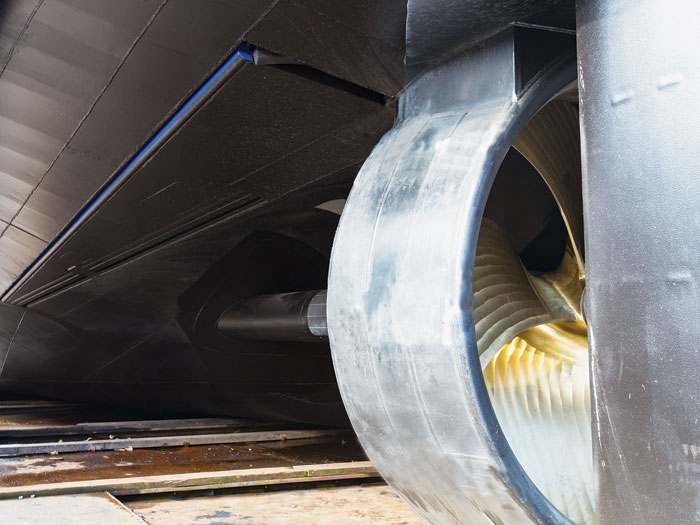 Tunnels ensure optimal water flow to the propellers at shallow drafts, but the downside of conventional tunnels is an increase in hull resistance, lower efficiency and increased fuel consumption.

Inland vessels are loaded, and therefore sail in deeper water conditions, for about 85 percent of the time, during which a tunnel is superfluous. The Flex tunnel is deployed when sailing in shallow waters to ensure sufficient water flow to the propellers and maintain their efficiency.

The first Flex tunnel installation is in the push-barge combination Rhenus Duisburg, developed by DST (Development Center for Ship Technology and Transport Systems) for Rhenus PartnerShip.

The vessel carries coal from Rotterdam to Lünen, Germany. The vessel not only has to sail with a barge linked in front, but also often has to convey two additional barges attached alongside during its passage along the Rhine.

The entire convoy makes a laden outward journey and then proceeds unladen along the Wesel-Datteln Canal. A sailing profile which is applied both while loaded and unloaded with ballast, and in deep and shallow water.The Van der Velden FlexTunnel has proven its functionality with this sailing profile.

Measurements were taken both during a trial voyage and in regular service. The vessel sailed in a range of circumstances, both loaded and unloaded, and at various speeds.

“The functionality was subjected to extensive trials at all speeds, and the measurements taken invariably remained within the design margins, which implies that there are no restrictions on the use of Van der Velden Flex tunnels at any speed whatsoever,” says Van der Velden. “As expected, the results confirm that extremely high vacuum levels are achieved with a deployed tunnel, which implies that the Van der Velden Flex tunnel is ideally suited for use with unladen vessels. The airtight seals on the thrusters and the hull ensure that there is sufficient water surrounding the propellers, thus avoiding any loss of output due to propellers breaching the surface of the water.”

The Flex tunnel enables the fitting of large, 2,000 mm propellers, improving propulsion and reducing fuel consumption as a direct result.

The initial findings, based on analysis of the measured data and comparison with vessels with conventional tunnels, suggest that the Rhenus Duisburg achieved around 27% lower energy consumption.

This high output is linked to application of the Van der Velden Flex tunnel, which in turn enables optimum stern design for the vessel’s operating area.

DST not only designed the underwater hull, but also subjected it to extensive tests. The model test reports predicted the actual circumstances almost exactly, which underscores the quality of the development institute’s model tests.