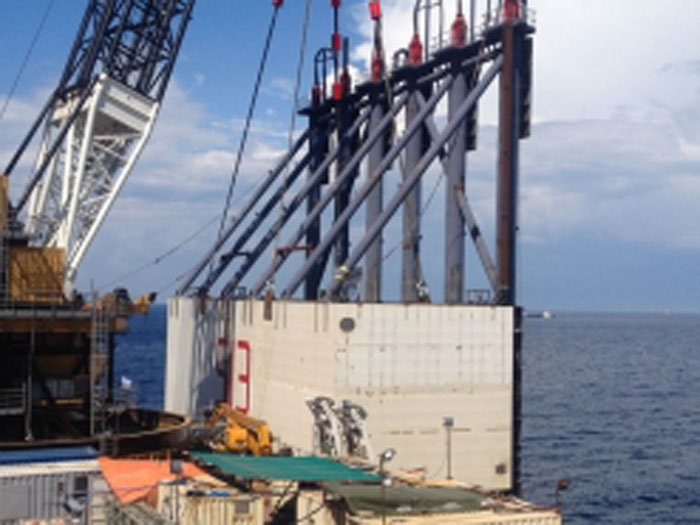 APRIL 30, 2014 — The committee overseeing the operation to remove the wreck of the Costa Concordia from Giglio Island, Italy, today ordered the temporary suspension of preparatory work. The decisions on how the wreck will be transported away and where it will be scrapped has not been finalized and the committee, reportedly, wants further information on what the various options involve.

The Ansa news agency quotes a representative of the Titan Micoperi salvage consortium as saying work will resume in “a matter of days.”

“We were asked for further information from the environmental point of view, considering the lack of documentation on one of the two options for removing the wreckage, the one about the Dutch ship [Dockwise] Vanguard,” Ansa quotes Sergio Girotto as saying. “In a few days we will present answers in order to resume work.”

Dockwise Vanguard, the world’s largest semi-submersible ship, has been optioned as a means for removing the wreck as an alternative to traditional towing.

Prior to today’s hold, the refloating operation had been making good progress.

The first of the 19 sponsons that will be used to refloat the Costa Concordia has now been installed. As we reported earlier, the 810-ton, 33.5 m wide, 11.5 m high sponson arrived in Gigio Island, on April 26. After two and one half days of work, the operations to install the unit were reported complete at 1.00 pm, April 28.

The sponson, the largest of the 19 in weight and size, is now positioned on the starboard side at about 11 meters in depth from the artificial seabed on which the Concordia has been resting since the parbuckling completed in September.

The sponson was unloaded from the barge on which it reached Giglio Island and placed into the water using the Conquest MB1 crane barge.

The Conquest MB1 is fitted with a sophisticated rotating/luffing crane and associated automated heel/trim compensation system.

The sponson was next completely filled with water in order to submerge it and allow connection, through a sophisticated automatic system, of the chains that keep it anchored to the wreck.

Technicians then partially emptied the sponson to make it lighter and give it the buoyancy needed to keep the chains tensioned.

Before refloating, another 14 sponsons need to be positioned on the starboard side and 4 on the port side of the Concordia. Sponsons will then be completely emptied to provide the buoyancy needed to refloat the Concordia and prepare it for its transportation.

Plans by the Titan Micoperi, made up of U.S. salvage company Titan Salvage and Italian marine contractor Micoperi, call for removal of the ship wreck in one piece. The plan was chosen by specialist representatives from Costa Crociere, Carnival Corporation & plc, London Offshore Consultants and Standard P&I Club, with the collaboration of RINA and Fincantieri.