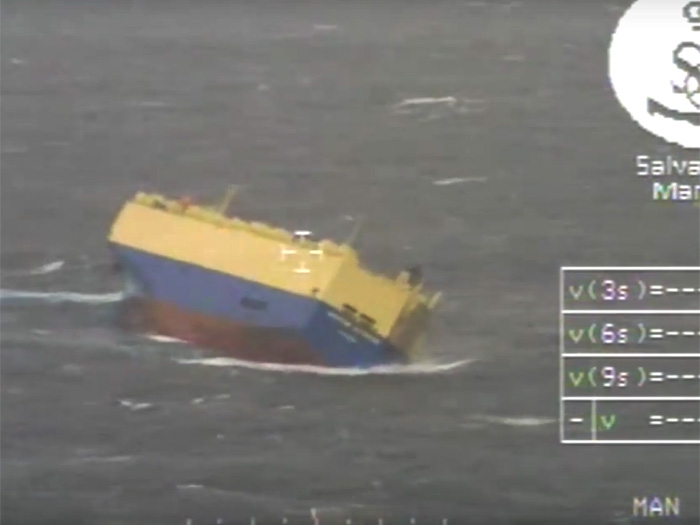 JANUARY 27, 2016 — Spanish rescue agency Salvamento Maritimo has released dramatic video of the rescue yesterday of 22 crew members from the car carrier Modern Express, which was listing heavily after reportedly losing power in the Bay of Biscay.

The ship, which was headed for Le Havre, France, from Gabon, issued a distress signal when it was 148 miles off Cape Ortegal, in the British SAR area. The U.K.’s Falmouth Rescue Coordination Sector coordinated the response and requested the Spanish agency’s help.

The 163 m RO/RO, had a list of up to 40 degrees, which combined with the weather, with winds of force 8, and the distance from land made evacuation difficult, says Salvamento Maritimo.

The rescue helicopter Helimer 401 rescued 16 crew members and took them to La Coruña airport. The remaining six crew members were rescued by a second helicopter and taken to Celeiro.

According to the Equasis data base, the beneficial owner of the 2001-built, Panamanian flagged Modern Express is Cido Shipping of Hong Kong