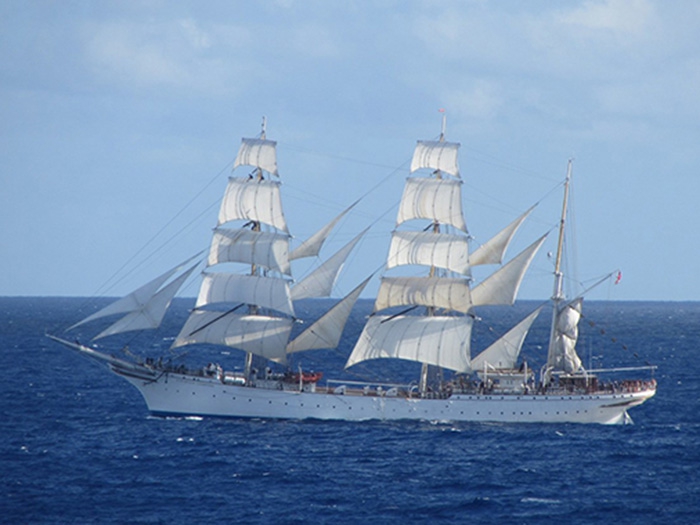 FEBRUARY 22, 2018 — Built over a century ago, in 1914, the Norwegian sail training ship Statsraad Lehmkuhl is the oldest of the large square riggers still in operation today, but she is soon to get a transplant of 21st century technology in the shape of a hybrid power system from Rolls-Royce that will enable herto cruise out of Bergen harbor without any greenhouse gas emissions.

Norway’s state-owned company Enova is providing over NOK 4 million in financial support for an innovative project to equip the historic square rigger with shipboard battery power.

Haakon Vatle, executive director of the Statsraad Lehmkuhl Foundation said: “The Statsraad Lehmkuhl has been relatively environmentally-friendly for over a century already. After all, for large parts of the year, wind power provides all the propulsion it needs. We are now going to make her next 100 years even more environmentally-friendly. We hope she will become a role model for other sailing ships and vessels of all types.”

The ship has a Bergen diesel main engine from Rolls-Royce that develops 1,125 hp and uses diesel generators to power shipboard systems, and for propulsion if necessary. Once installed, the battery will assist in both areas, thereby reducing the number of generators that need to be kept running. The battery system will also allow the power of the wind in the ship’s sails to be exploited.

According to Andreas Seth, Rolls-Royce, Senior Vice President – Electrical, Automation & Control, the ship’s propeller can also be used to generate electricity, rather like a wind turbine.

“The amount of electricity produced will vary with the speed of the ship,” he says, “but with our system the energy can be stored in batteries for use as environmentally-friendly engine power, or for day-to-day shipboard operations such as heating and cooking.”

Enova, which works to facilitate Norway’s transition to a low-emissions society, is contributing just over NOK 4.2 million to the ship’s refit.

Nils Kristian Nakstad, Managing Director, Enova said: “Given the shipboard battery revolution currently underway, we can safely say that a fresh wind is blowing through the maritime sector at the moment. Projects are underway to test battery solutions in practically every kind of ship – now even sailing ships!”

According to Nakstad, Enova views the Statsraad Lehmkuhl as an important showcase for this new technology. “

The Statsraad Lehmkuhl plays an important role in the training of the Norwegian Naval Academy’s cadets, as well as the further education of apprentices and those undertaking vocational training to become licensed seamen and marine engineers,” he says. ‘Soon the ship will give the next generation of mariners early experience of this new technology. It will help to build knowledge about, and positive attitudes towards, battery solutions that will stand them in good stead later in their careers,” he said.

At the same time as the batteries are being installed, the ship will also being made ready to receive onshore power to recharge the batteries, ensuring environmentally-friendly stays in the ports the ship visits.

This applies not least to its home port of Bergen, where the combination of batteries and onshore power will result in zero emissions.

The vessel is currently in drydock in Bergen, where a special battery room is being built. Due to the ship’s busy sailing schedule, the project will not be finally completed until November at the earliest.

The ship can accommodate up to 150 trainees in hammocks, with additional cabin capacity for up to 40 people, providing living quarters for the permanent crew and occasional extra training staff.