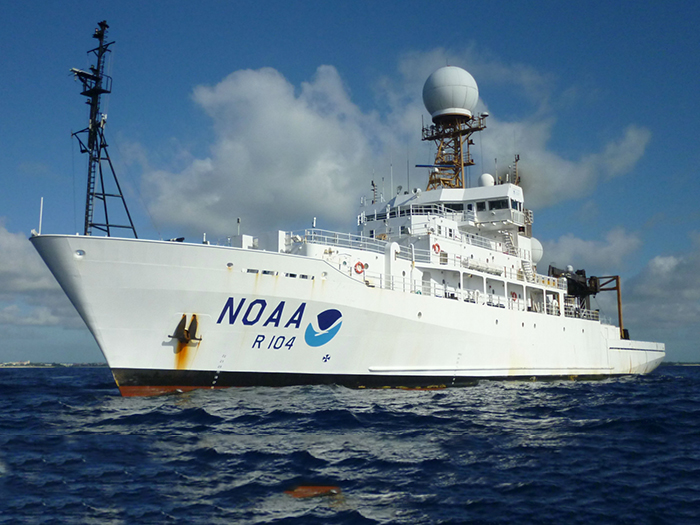 The National Oceanic and Atmospheric Administration’s effort to recapitalize its aging fleet of research ships took a step forward December 31 with the U.S. Navy’s award of a $178,082,877 contract to shipbuilder Thoma-Sea Marine Constructors LLC, Houma, La., for the detailed design and construction of two new oceanographic ships for the agency. NOAA is acquiring the vessels through an agreement with the Naval Sea Systems Command.

The new ships will support a wide variety of missions and will be built to commercial standards. They will incorporate the latest technologies, including high-efficiency, environmentally friendly EPA Tier IV diesel engines, emissions controls for stack gases, new information technology tools for monitoring shipboard systems, and underwater scientific research and survey equipment.

“These state-of-the-art ships will play a vital role in collecting high-quality data and leading scientific discoveries,” said Neil Jacobs, PhD., acting NOAA administrator. “The science missions aboard these vessels promise to push the boundaries of what is known about our still largely undiscovered ocean.”

The ships will be equipped to launch work boats, perform maintenance on buoys and moorings, deploy scientific instruments to collect weather and water column data, and conduct seafloor mapping surveys. Each vessel will operate with a crew of 20 and will accommodate up to 28 scientists.

“This contract award represents a major step forward in the process to recapitalize NOAA’s ship fleet,” said NOAA Rear Adm. Michael J. Silah, director of the NOAA Commissioned Officer Corps and NOAA Office of Marine and Aviation Operations (OMAO). “We thank the Navy, our valued partner, for its assistance with this acquisition.”

The NOAA ship fleet is operated, managed and maintained by OMAO, which is composed of civilians and officers with the NOAA Commissioned Officer Corps.