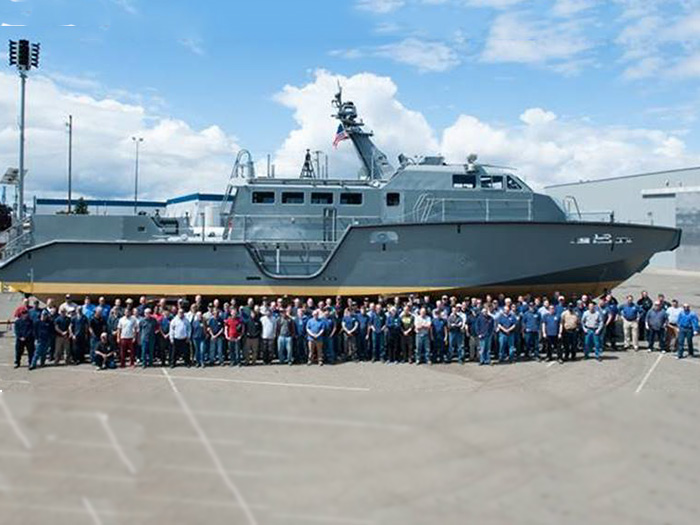 Bremerton, Wash., headquartered SAFE Boats International is to bring back production to its Large Craft Production Facility (LCPF), located in the Port of Tacoma, which specializes in production of vessels over 65 feet in length.

This follows success in winning a $20 million U.S. Navy contract to purchase long-lead material and start pre-production planning for a series of 85-foot Mark VI patrol boats for the Government of Ukraine. A further $80 million ward is anticipated in June.

The contract will see 75 new jobs added to the shipbuilder’s Tacoma workforce.

Leadership from local elected officials and economic development partners paved the way for the expansion enabling SAFE Boats early access to information and support during its due diligence phase. A project team from the Economic Development Board for Tacoma-Pierce County (EDB), City of Tacoma, Port of Tacoma, Pierce County, and Impact Washington, the Washington state affiliate of the National Institute of Standards and Technology – Manufacturing Extension Partnership network, worked with the company to identify new and existing opportunities for assistance with grants, permitting, and workforce development.

“SAFE Boats is incredibly fortunate to have such a strong and engaged team supporting our efforts to bring production back to our Tacoma facility,” said Richard Schwarz, CEO of SAFE Boats. “We have been working toward this goal for more than three years and this project team has supported us every step of the way. This is an incredible example of a true partnership which will create jobs and generate economic growth for the region while supporting national security and foreign policy objectives.”

“The Tacoma Tideflats is a working waterfront that supports thousands of manufacturing and industrial jobs, and we are thrilled for SAFE Boats to reopen operations at the port,” said Dick Marzano, Port of Tacoma commission president. “The addition of these high-skilled jobs is important to the maritime industry and an integral part of Pierce County’s economic recovery and growth.”