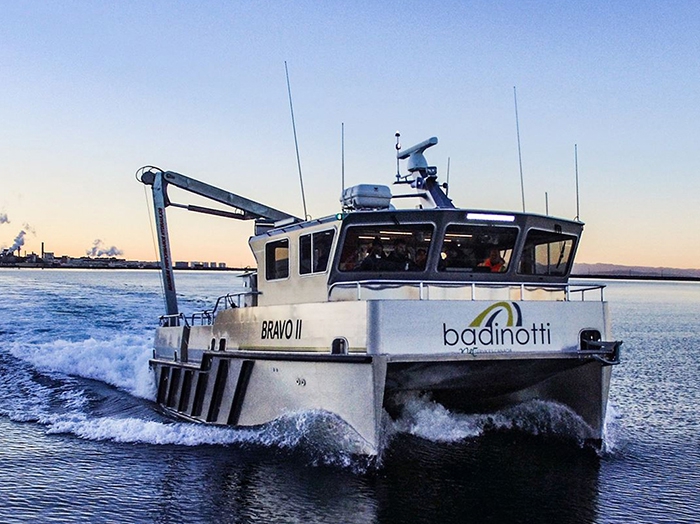 “In 2017 most fish farm companies have completely eliminated the use of antifouling coatings from their operations,” says Badinotti CEO Kevin Onclin. “As a result the traditional business model for the net service that relied upon dipping or coating of nets had to adapt and reinvent operations to keep pace.”

The process of cleaning a net when still suspended in the water involves use of a Remote Controlled Net Cleaner (RONC) that is controlled by an operator on a boat on the surface.

Initially working from the deck of a converted fishing boat, Badinotti spent two years researching and developing the concept of a dedicated vessel.

“We were looking to custom build a boat for on site washing that would maximize the efficiencies for the machinery, equipment and crews,” says Mr. Onclin. “We selected a catamaran design to create a stable safe working platform for the crews and machinery as most of the hours of operation occur at the farm sites as opposed to traveling between or to sites.”

The extended design period allowed attention to detail to fully outfit the vessel to the job, For example the boat produces 750 gallons of fresh water per day which allows all of the net cleaning equipment, which is run with saltwater, to be soaked and rinsed on a routine basis. This will extend the life of all the working parts.

The Bravo II is designed with accommodations for a four-person crew.

With a house set well forward the vessel has a wide expanse of aft deck to support the innovative machinery used for cleaning the nets.

A pair of Cummins Marine QSB6.7 engines, each delivering 480 hp at 3,000 rpm, power the new vessel. The engines turn 28 by 24-inch four-blade dyan quad bronze props on two-inch shafts through ZF286A gears with1.962:1 ratios. With left and right tuning props mounted in each hull, together with an Imtra SH300 bow thruster, the boat has excellent station keeping abilities.

The catamaran, delivered in January this year, has a top speed of 12 knots and cruises at ten knots.

The two RONCs are launched with the aide of a MPH knuckle-boom marine crane with a 1,000 kg lift at 7.6 meters. They are controlled via CCTV monitors and joy sticks by two operators seated in an aft deck mounted compartment.