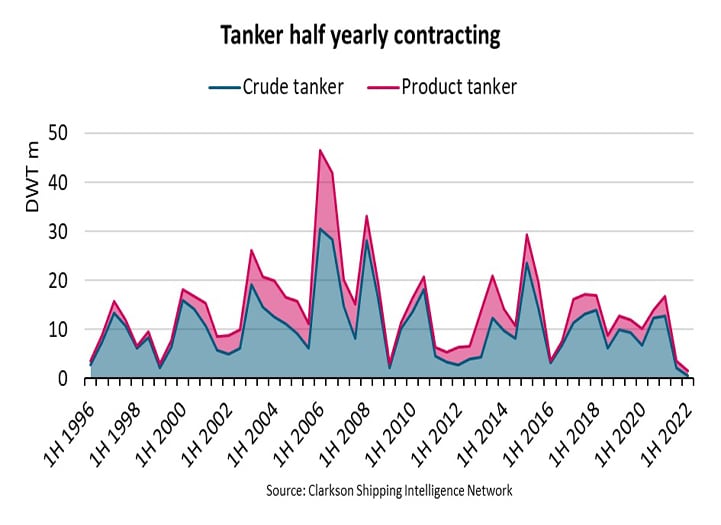 At one time, oil tankers were the mainstay of world shipbuilding, at least in tonnage terms. Now, though, BIMCO reports that in the first six months of this year only 1.6 million dwt of crude and product tanker tonnage was ordered — the lowest half year on record.

Between 1996 and 2021, the lowest half-yearly tanker contracting volume was 3.0 million dwt, recorded in the first half of 1999. Despite improved freight rates and a more positive market outlook, the first six months of 2022 ended with barely more than half that volume. Consequently, the order book to fleet ratio has fallen to 5.1% for both crude and product tankers, a ratio which is also the lowest since 1996.

“Only 23 tankers have been contracted in the first half of 2022: four crude tankers and 19 product tankers,” says Niels Rasmussen, chief shipping analyst at BIMCO.

The highest newbuilding prices since 2008 and price increases of between 25% and 42% since November 2020 may have discouraged owners, and many may be waiting for more attractive prices. Uncertainties about which fuel to choose may also have delayed some orders. So far, the favorite alternative fuel for orders has been LNG but it appears that methanol may be gaining in popularity, especially in the container sector.

“Unless contracting picks up, it seems that we may see both the crude and product tanker fleet reducing in size in the coming years,” says Rasmussen. “As 6-7% of both the crude and product tanker capacity is at least 20 years old and 20-21% is between 15 and 19 years old, annual demolition would normally reach around 3% of the fleet capacity, which would thus exceed planned deliveries.”

In the short to medium term there appears to be a good case for more tankers to be ordered, says Rasmussen. This is because global oil demand has still not fully recovered from COVID and because 2023 is expected to bring increased tonne miles demand due to the EU ban on Russian oil and oil products being fully implemented.

In the longer term, demand prospects are a bit more uncertain as the International Energy Agency predicts that oil demand could peak between the mid-2020s and mid-2030s.

Still, says Rasmussen, the fleet will eventually have to be renewed, not least in order to reduce greenhouse gas emissions, and contracting will thus increase in the coming years.