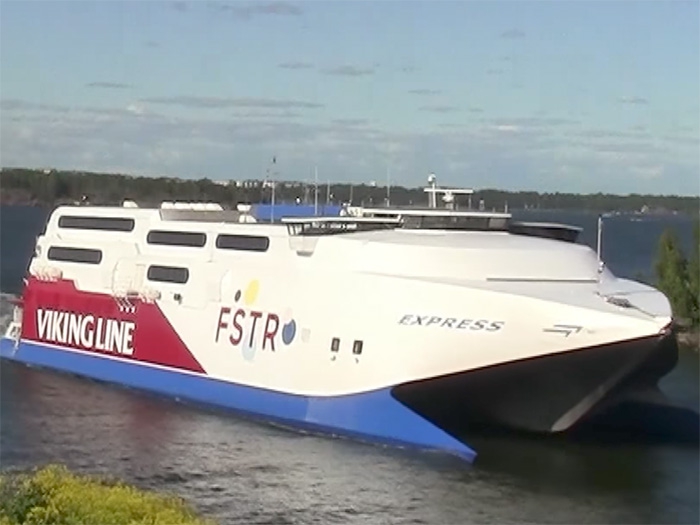 OCTOBER 16, 2017 — Finland’s Viking Line is taking the 91 m Incat wavepiercing catamaran HSC Express, which it has been operating on its Helsinki-Tallin route as Viking FSTR, out of commission tomorrow, October 17, a few days earlier than the originally planned October 22, due to unspecified technical reasons,

This summer, Viking Line significantly increased its capacity on the Helsinki–Tallinn route from April to October by chartering in the wavepiercer from Nordic HSC which acquired the vessel last year when P&O ended its high speed service between Northern Ireland and Scotland.

The wavepiercer, which was delivered in 1998 as the Catalonia, notched up records on its delivery voyage that included the fastest Atlantic eastbound record, making the 3,125 mile (5,029 km) run from Manhattan to Tarifa, Spain in 3 days 7 hours 54 minutes, traveling at an average speed of 38.877 knots.

As Viking FSTR, she was able to make the Helsinki-Tallin run in under two hours. Today, though, Viking said that “due to technical challenges faced over the last few days,” it has “decided to take the vessel out of commission a few days earlier than planned.”

Customers who have already booked a trip on Viking FSTR will be notified of cancelations and provided with an opportunity to transfer their trip onto the other vessel serving the route or to receive a refund.