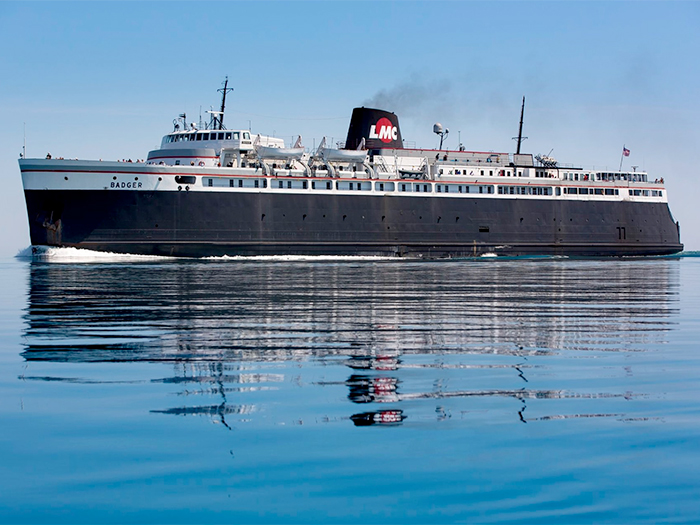 Interlake Holding Company has purchased the assets of Pere Marquette Shipping Company and Lake Michigan Car Ferry Company in an acquisition that includes two working Great Lakes vessels, the articulated tug-barge(ATB) Undaunted/Pere Marquette 41 and the S.S. Badger, a historic passenger-and-car ferry that is the the last coal-burning steamship in the United States .

The acquisition signals the creation of a new business entity, Interlake Maritime Services, which will manage the new businesses along with The Interlake Steamship Company and its fleet of nine freighters.

“This is an exciting day for us and we are thrilled to be welcoming new employees into our Interlake family, new vessel lines into our Great Lakes operations, and new customers and cargoes into our portfolio of business,” says Mark W. Barker, president of Interlake Holding.

“There are many synergies between our family-owned and operated companies and this deal was a good fit for all of us from the beginning,” says Robert Manglitz, President of Pere Marquette Shipping and Lake Michigan Car Ferry. “It was critical for us to find not only a highly committed and capable vessel operator but also a company that shared our culture of putting its employees and customers first.”

Interlake says the ATB Undaunted/Pere Marquette 41 is a workhorse on the Lakes carrying a variety of cargoes that traditional self-unloaders cannot, such as large armor stone for break walls, pig iron, scrap and other miscellaneous materials.

“We are adding capacity and assets in areas that our customers have identified a need for. This is a market we have been looking at for some time and this strategic acquisition will allow us to participate in it with a proven asset and a respected customer base,” Barker says. “We look forward to working with them and building on the strong relationships that the previous owners and management have developed.”

While a car ferry may seem like an unusual asset for a fleet of Great Lakes self-unloading vessels, the Barker/Tregurtha families who own Interlake Holding also own Seastreak, a fleet of high-speed passenger ferries that operate in New York Harbor and from various other locations on the east coast including New Bedford, Mass.

In recognition of its heritage and its significance on the Great Lakes, the S.S. Badger has been designated as a National Historic Landmark. Entering service in 1953 it served as a rail car ferry until 1990 when it was laid up for a year before being purchased and converted into a car ferry.

LMC and Tug-Barge Executive Vice-President Don Clingan said, “Car ferries in Ludington have been an icon and important economic driver for the community for more than 100 years. When the Badger ended service in November of 1990, many employees and local citizens believed that the era of car ferry service had ended. The rebirth of the Badger in 1992 marked a major milestone in maritime history on the Great Lakes. Now, 29 years later, another milestone has been achieved with the sale of the company to a highly qualified new owner who will extend the legacy of the Badger into the future for both port cities of Ludington and Manitowoc.”

“As a maritime company, we understand how important the Badger connection between Ludington, Mich., and Manitowoc, Wis. is to those communities,” Barker says. “Interlake is fully committed to continuing its operation as the largest cross-lake passenger service on the Great Lakes, a key part of US10 highway and a vital link across Lake Michigan.”