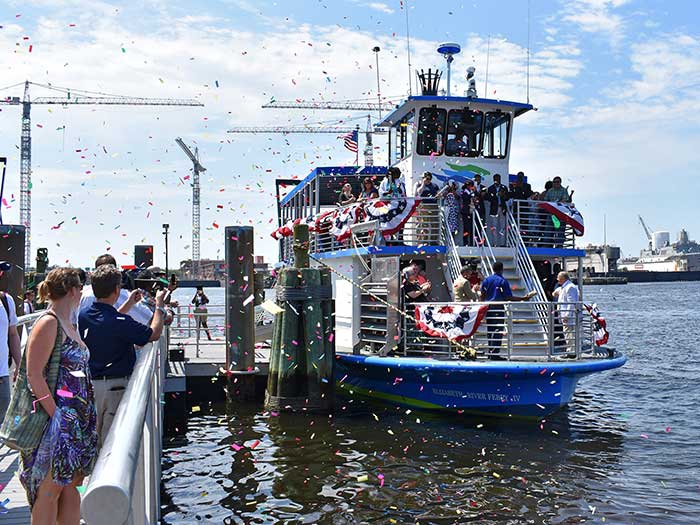 Elizabeth River IV is the first in a series of BMT-designed U.S. passenger vessels due to be delivered in the next year

Designed by BMT and constructed by the Armstrong Marine shipyard in Swansboro, NC, the ferry is the first of three to be delivered to the agency as part of a $7 million program to replace the fleet’s aging vessels. The newest Hampton Roads Transit (HRT) ferry was delivered in 1990 and the oldest in 1982.

Key improvements over the existing Elizabeth River ferries include electronic controls and navigation, greater fuel efficiency, accessibility features, and a more efficient two-ramp configuration. In contrast with previous vessels that only had a single side ramp, the new configuration allows passengers to embark and disembark faster. The flat deck and door sill ramps also significantly improve access for those with disabilities.

In addition, Armstrong Marine holds a $4.15 million contract to build a 131-passenger aluminum hull catamaran ferry for North Carolina. The ferry, designed by Elliott Bay Design Group, Seattle, WA, will be delivered in May 2018.

The Elizabeth IV’s christening is also a significant milestone for BMT in that it is the first in a series of BMT-designed U.S. passenger vessels due to be delivered in the next year, including new ferries for the Sayville Ferry Service, New Orleans Regional Transit Authority, and Entertainment Cruises.

“We’ve made a concerted effort to bring BMT’s world-class ferry design portfolio to the U.S. market,” said BMT Designers & Planners President Kai Skvarla. “It’s exciting to have our first passenger vessel designed exclusively here in the U.S. entering service, with a lot more on the way from BMT in the coming year.”