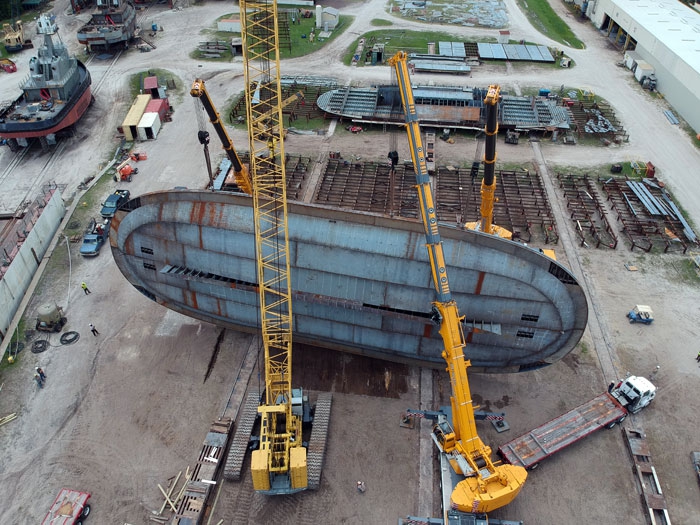 JUNE 4, 2018 — St. Johns Shipbuilding (SJSB), Palatka, FL, recently announced that it is on schedule with the construction of two 152 ft x 52 ft ferries for Fisher Island.

Designed to transport 30 vehicles, the first ferry is scheduled for a December delivery to Fisher Island. The hull was rolled over on May 26.

“As owner’s representative for the Fisher Island Ferry Project, S&Y Marine Corporation has been very impressed with the work at St. Johns Ship Building,” says Shaun L. Preacher, Owner’s Representative, S&Y Marine Corporation. “The production and build is on schedule, the workmanship is first rate, and the work force is very professional. At its current pace, the two ferries will be delivered on schedule and as planned,” adds Preacher.

Other recent jobs at St. Johns include the delivery of 25 ft truckable tug Iron Horse. This is the most recent of SJSB’s “Iron Series” of truckable tug boats. These versatile workhorses are a staple for the marine construction industry.

In addition, the research vessel OCearch is on drydock at the shipyard for repairs. SJSB is also nearing completion of another 190 ft landing craft for Caribbean cargo transportation.

CORRECTED: This is a corrected version of an earlier article that contained an editing error and misstated that the first Fisher Island ferry had been launched.