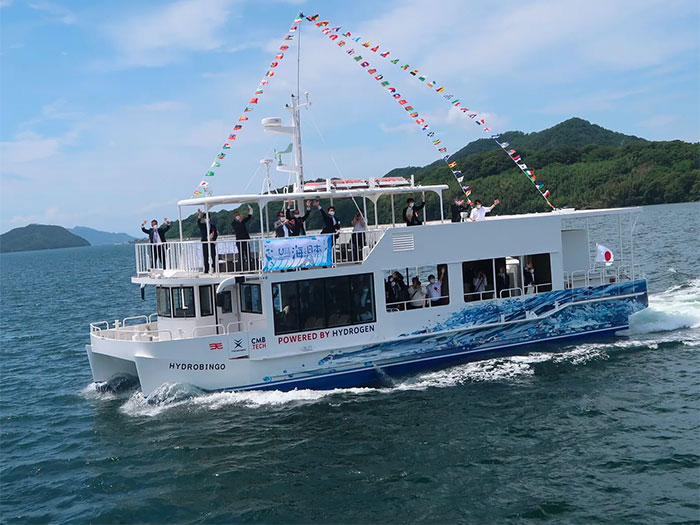 Ferry is world's first to be powered by internal cobustion engines burning hydrogen as a fuel.

The world’s first ferry to be powered by hydrogen-fueled engines was unveiled before a group of Japanese children from Urasaki Primary School last week. Called HydroBingo, the 80-passenger vessel is the product of a partnership between Belgian shipowner CMB (Compagnie Maritime Belge) and Japan’s Tsuneishi Group. It was built at the Tsuneishi Facilities & Craft Co. shipyard in Onomichi, Japan, which specializes in smaller vessels.

After being introduced to the children, the ferry was the centerpiece of a more formal ceremony before a large audience, attended by the Belgian Ambassador to Japan.

“Thanks to this strong collaboration, we have been able to build this unique vessel. it is the result of the joining of forces of two families and companies with a long history in Japan and Europe,” said CMB CEO Alexander Saverys, “CMB and Tsuneishi will continue to invest in hydrogen applications for the maritime and land-based industries. This is only the beginning of a very exciting journey towards zero carbon shipping.”

Powered by two hydrogen fueled internal combustion engines, the HydroBingo is equipped with a mobile hydrogen trailer at the stern, which is designed to deliver hydrogen to the engines via a special double walled pipeline. The trailer can be unloaded easily via ramp and brought to a refueling station for refill.

In addition, says CMB, the vessel has “several hydrogen-related applications that reflect the dual-fuel ship design based on the requirements of the IGF Code and according to the ‘Safety Guidelines for Hydrogen Fueled and Fuel Cell ships’ made on the basis of hydrogen fuel specialties. This vessel has also received approval for inspection from the Japan Craft Inspection Organization (JCI).”

Earlier this year, CMB and Tsuneishi launched a formal joint venture that is intended to accelerate adoption of hydrogen internal combustion engine technology for the Japanese industrial and marine market. CMB’s subsidiary CMB Tech has built up extensive knowhow over the years and has successfully developed concrete applications with dual fuel and monofuel hydrogen engines.

Since 2017, CMB has developed a wide variety of hydrogen-powered engines and applications, including the world’s first 1 MW dual fuel hydrogen diesel engine developed by BeHydro which is a joint venture vehicle with ABC Engines. The new CMB-Tsuneishi joint venture will be the sole agent for the import of BeHydro engines in japan.

The two companies’ next vessel be a hydrogen-powered tugboat, the HydroPhoenix.