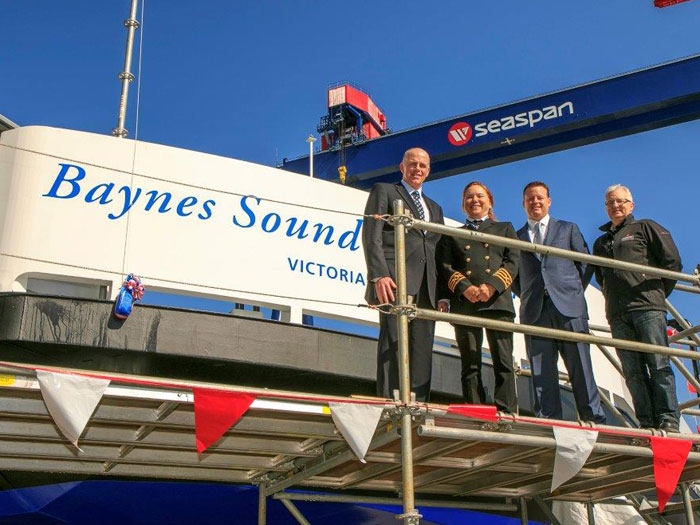 The 78.5 m ferry—named after the channel it will regularly cross—is scheduled to enter service later this summer, and accommodate up to 50 vehicles and 150 passengers while operating between Buckley Bay and Denman Island.

Using one drive cable and two guide cables, Baynes Sound Connector will be one of the longest cable ferries in the world, traversing a distance of approximately 1,900 m at speeds of up to 8.5 knots.

“Seaspan has a deep-rooted and established relationship working with BC Ferries to build and repair ships for the people of British Columbia, and we are proud to construct and officially christen its first-ever cable ferry,” said Brian Carter, President, Seaspan Shipyards. “Today’s celebration is an exciting and important step in our longstanding commitment to BC Ferries and its customers, and we look forward to continuing that role and being a key contributor to B.C.’s economy for many years to come.”

The cable ferry project follows several other recent BC Ferries contracts that have been successfully completed at Seaspan Shipyards, including a multi-million dollar upgrade of the Queen of Oak Bay, as well as several other maintenance refits on the Northern Adventure, Island Sky, Coastal Celebration, and Spirit of Vancouver Island.

“Today marks a special milestone in our vessel replacement program as we honor maritime tradition with the naming ceremony and thank the workers at Seaspan’s Vancouver Shipyards who have produced a fine vessel for us,” said Mike Corrigan, BC Ferries’ President and CEO.

Baynes Sound Connector will soon be towed to Buckley Bay on Vancouver Island, where it will be connected to the three cables that were newly laid in April.

In June and July, BC Ferries’ crews will undergo extensive training and familiarization on the cable ferry in preparation for passenger and vehicle service. After receiving certification from Transport Canada and classification society Lloyd’s Register, the cable ferry will enter service by late summer.