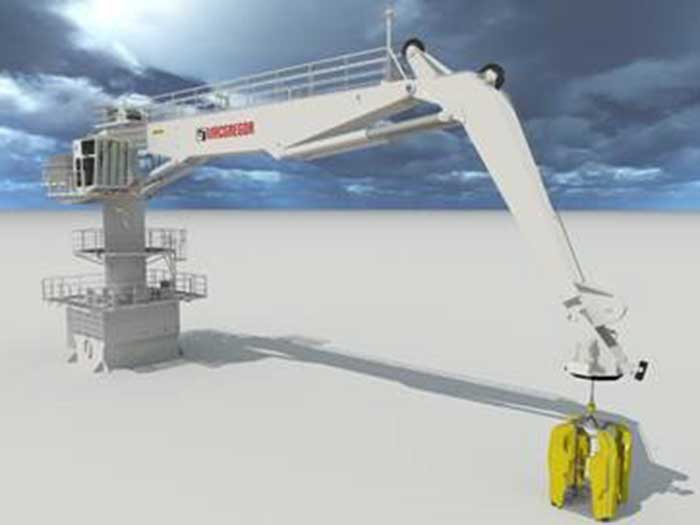 JUNE 6, 2017 — MacGregor, part of Cargotec, is continuing to develop its offerings for the offshore wind energy market and is participating at this week’s Offshore Wind Energy event in London, U.K.

The world’s first floating offshore wind farm, Statoil’s Hywind pilot park nearing completion in Scotland, U.K., is one notable example of MacGregor’s capabilities. It will feature Pusnes substructure connection mooring systems from MacGregor, which have been delivered and will be installed when the hulls are complete.

All wind turbines require regular inspections and maintenance, which can be a challenging task in harsh offshore environments. MacGregor has developed and delivered full three-axis motion-compensation technology, which can enable a crane to keep a suspended load in a fixed position relative to the turbine platform.

This is an important capability when landing containers of tools, equipment and personnel onto the small platforms at the top of offshore wind turbine foundations with little margin for error. It is also well suited for maintenance work on these turbines and other fixed installations.

“Turbine platforms are about 20m above the water and they are often only a few square meters, so precise load and personnel handling is necessary,” says Mr. Rokstad. “Although MacGregor’s standard active heave compensation (AHC), supplied through a crane’s winch, compensates for the vessel movements; a greater degree of precision is sometimes needed.”

In line with this, last year MacGregor introduced the 3D Motion Compensator (3DMC), a flexible retrofit device designed to enhance the load-handling precision of an offshore crane even in challenging sea states.

The 3DMC can be fitted to the knuckle-jib of a broad spectrum of new or existing MacGregor subsea/offshore cranes. It compensates for the roll, pitch and heave motions of the vessel to minimize any movement of the load when lifting to and from fixed platforms.

The 3DMC has a main boom that can be hoisted, lowered, slewed and extended. This provides movement in all axes to allow for full three-dimensional compensation. It has been designed for easy installation and makes use of the existing hydraulic power unit and control system of the crane so all operations are performed from the existing interfaces in the crane cabin. When not required, the 3DMC simply remains fixed to the side of the crane’s knuckle-jib allowing normal lifting operations using the main and whip winches.

MacGregor’s growing market presence was strengthened in 2016 when it announced its participation in a pilot project pioneering the use of Nemos. It is an innovative system that generates electricity from waves and that can work in combination with offshore wind farms, where it can share electrical infrastructure. This lowers the levelised cost of energy (LCOE) and smooths fluctuations in power-generation, therefore supporting greater commercial viability of renewable energy capture. For its part in the project, MacGregor is supplying highly-specialized winches.