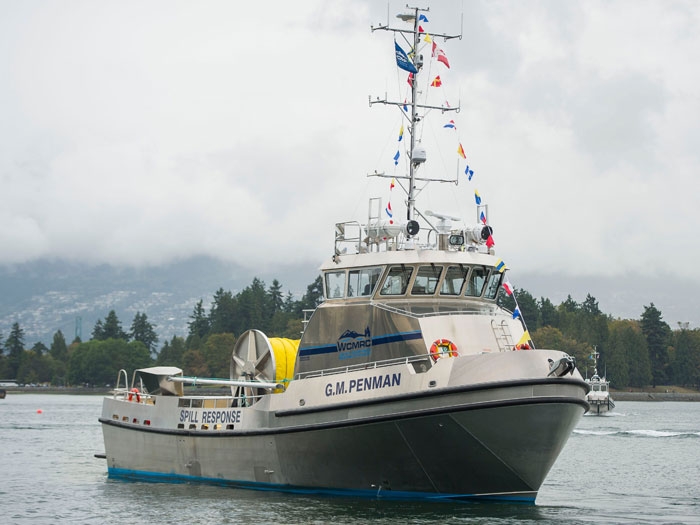 The $4.5 million G.M. Penman is a 65-foot Ocean Class oil spill response vessel (OSRV) built by Rozema Boat Works, Mount Vernon, WA. It is only the fifth vessel of its kind in the world with sister vessels operating in Santa Barbara servicing the offshore production platforms off the California coast.

The G.M. Penman has a top speed of 26 knots when traveling to an incident. Once on-scene, the boom arms can be deployed within minutes. Two onboard Lamor skimming brushes have a combined skimming capacity of 32.8 tonnes per hour.

With overnight accommodations for five crew members and a FLIR (forward-looking infrared) camera, the G.M. Penman is the first vessel in WCMRC’s fleet that can operate continuously for multiple days in open water before requiring resupplies.

The G.M. Penman joins WCMRC’s fleet of 32 spill response vessels, including two other Rozema built vessels — the 47-foot Bay Class OSRV’s the Eagle Bay and the M.J. Green. It will conduct sea trials in Vancouver for prior to being deployed to one of WCMRC’s satellite response bases on the West Coast.

Should Kinder Morgan Canada’s Trans Mountain Pipeline expansion project proceed, WCMRC will be implementing a $100 million investment program to create new response bases in the Salish Sea and fund new equipment, including the addition of a number of similar G.M. Penman sized oil spill response vessels to WCMRC’s fleet. The new response bases and vessels will cut planning standards for response times in half and significantly increase response capabilities.