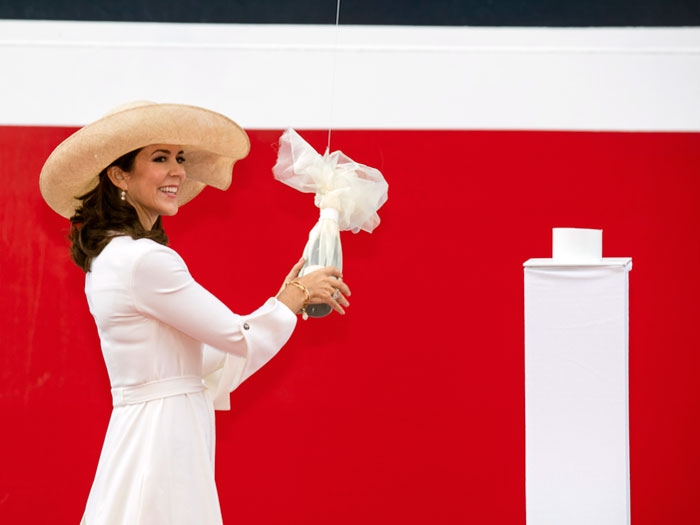 H.R.H. Crown Princess Mary of Denmark was the ship’s godmother, christening the vessel by breaking a bottle of champagne against the tanker’s bow

JUNE 15, 2016—The 50,000 dwt chemical and product tanker Stenaweco Impulse was recently named at Langelinie Pier in the center of Copenhagen at a christening ceremony attended by 300 guests. H.R.H. Crown Princess Mary of Denmark was the ship’s godmother, christening the vessel by breaking a bottle of champagne against the tanker’s bow.

The 183m x 32m Stenaweco Impulse, owned by Stena Weco, a joint venture between Swedish Stena Bulk and Danish Weco Shipping, will transport vegetable oil, chemicals and petroleum products worldwide. he ship is the sixth in a series of 13 IMOIIMAX MR tankers ordered and will trade in Stena Weco’s global logistic system, which includes more than 60 vessels.

”We are very proud of our IMOIIMAX fleet with six vessels delivered so far. The concept, with its innovative design, has already proved to be very successful, as has the operative collaboration with Weco Shipping, which was formed five years ago,” says Erik Hånell, President and CEO of Stena Bulk and CEO of Stena Weco.

“The Stenweco Impulse has given our collaboration with Stena Bulk a new dimension as we now also have a jointly owned vessel. I am, naturally, extra proud that the naming ceremony took place in Copenhagen with H.R.H. Crown Princess Mary of Denmark as the godmother,” says Johan Wedell-Wedellsborg, Chairman of Weco Shipping.

IMOIIMAX is a further development of an already well-proven concept and the innovative technical design was jointly developed by Stena Teknik and Chinese shipyard GSI (Guangzhou Shipbuilding International). Stena says it offers numerous advantages such as extra large cargo flexibility, a high level of safety and economical fuel consumption – 10-20% lower than that of equivalent vessels when sailing at service speed.  The Stena Impression, Stena Image, Stena Imperial and Stena Important were delivered in 2015 and the Stena Imperative in January 2016. The remaining six vessels, after Stenaweco Impulse will be delivered every third month and the last vessel in 2018. Three of the 13 IMOIIMAX tankers are wholly owned by Stena Bulk, six together with GAR (Golden Agri Resources), two by Stena Bulk’s sister company Concordia Maritime and two by Stena Weco.