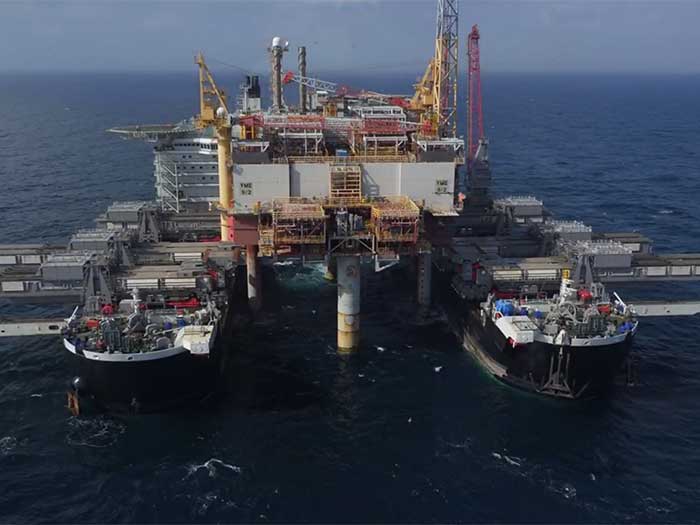 The Yme MOPU is a jack-up type platform standing on three steel legs of 3.5 m diameter, which are inserted approximately 10 m inside the subsea storage tank columns at 93 m water depth.

With this platform removal, Allseas was able to demonstrate the unique single-lift capabilities of Pioneering Spirit.

The platform has since been sea-fastened on board and the vessel is currently on her way to the newly developed dismantling yard in Lutelandet, Norway.

Two tilting lift beams for the installation and removal of jackets will be located at the vessel’s stern. Pioneering Spirit is also equipped with pipelay equipment that makes it possible to install record-weight pipelines from shallow to ultra-deep water, and achieve high lay rates. The tensioner capacity of 2000 t is double the capacity of the world’s largest pipelay vessel, Allseas’ own Solitaire.

The vessel was built in South Korea by Daewoo Shipbuilding and Marine Engineering (DSME) and arrived in Rotterdam for final outfitting in January 2015.

The installation, commissioning and offshore testing of the topsides lift system beams was completed earlier this month, after which Pioneering Spirit successfully executed its first commercial project, removal of the Yme topsides.